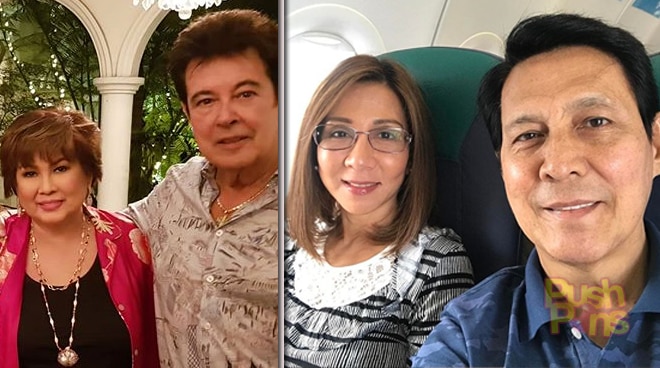 When showbiz personalities walk down the aisle, people are left in awe by the merriment and the spectacle.

But sadly, there are those who doubt it all.

They ask, will it last long? How many years before they call it quits? Is their love for real? No, walang forever, they assert.

They are well-founded with failed marriages between celebrities almost customary in a fleeting, illusory realm.

But, there are those showbiz couples who prove this assertion wrong. They truly found forever in their spouses, sticking it out with them through thick and thin, fulfilling the wedding vows they shared, and raise a happy family they always wanted.

To celebrate Valentine’s Day, PUSH features the 10 longest-lasting marriages, formalized by either civil or church rites, of showbiz artists we all aspire to have.

The action star and his leading lady had initially thought sparks would never fly between them. But eventually their closeness developed on set that later led to a wonderful relationship.

Ronnie was Mariz’s first love and true enough, theirs was one that has really lasted. They got married in 1993 and 25 years later, they say, it is as if they were still honeymooners.

From being best friends and co-actors in a handful of productions including the original staging of Miss Saigon, they became lovers.

They got first got hitched in 1991 in civil ceremonies in London and a subsequent church wedding a few years after. They are proud parents to three adult kids.

Playing as husband and wife in their first theatrical play together Taga sa Panahon, these prized character actors became a real couple offstage.

They found forever in each other and exchanged vows in 1988. Their nearly three-decade long marriage bore four children, including their late daughter Julia.

The heir to the action throne of father Ramon Revilla, Sr., a then 20-year-old Ramon “Bong” Revilla was already a rising action star when he wed Lani Mercado, an 18-year-old teen actress who just graduated from high school.

In 1986, the youngsters got married in the US, setting off a 32-year union to this day that has faced triumphs and troubles through the years. Their marriage is still intact with Bong’s passion and Lani’s unparalleled devotion.

Angeli wasn't only Gary V.'s "dream girl," she became a caring and selfless wife and talent manager and loving mother to kids Paolo, Gab and Kiana.

Their over three decades of togetherness blossomed from the time they first met at a concert where Gary’s high school glee club, the La Salle Greenhills Kundirana, was performing.

It would seem unlikely that this legendary comic would stay loyal to the one woman he married in 1982, but the truth is, Joey de Leon has never left Eileen Macapagal’s side for 35 years.

As Joey blazed the trail as a TV host-comedian, Eileen was the dedicated wife and loving mother to their three kids Jocas, Jako, and Jio.

Tirso Cruz III is the acting luminary we have all loved, admired and respected for close to half a century. Lately, we witnessed his greatness as the evil Don Julio Ardiente in Wildflower. Being that merciless murderer in the revenge drama, it’s quite heartening to know how much dedicated he is in real life to his wife of 36 years, Lynn Ynchausti-Cruz and to his children Bodie, TJ, and Djanin.

The prominent, controversial, and accomplished Gutierrez clan surely owes their unprecedented stature in the industry to Eddie Gutierrez and Annabelle Rama, one of the most influential couples in showbiz.

What’s behind their success? It’s their unwavering devotion to each other as husband and wife of four decades, cunning showbiz acumen, and strong and loving support as parents to kids Ruffa, Elvis, Rocky, Richard, Raymond, and Ritchie Paul.

While their marriage in Batangas was kept secret in 1969, Tito Sotto and Helen Gamboa proved that nothing can stop true love, and this has gone strong for 48 years.

Although they faced numerous challenges through those years, Tito and Helen never wavered in fulfilling their longtime vows. They were each other’s rock, with Helen being the ever gracious Senator’s wife and Tito the ever sympathetic and reassuring husband of the lovely veteran actress. Who else could be happier than their loving children Romina, Diorella Maria, Gian, and Ciara?

A showbiz marriage that has lasted more than half a century? It’s real. The love that showbiz legends Robert Arevalo and Barbara Perez share is truly rare. And owning that incredible feat of having the most enduring marriage in showbiz is just a story of a man and a woman who truly love each other.

Barbara sacrificed everything, while Robert fought for her when they were emerging talents in their respective studios in the 1960s. It was a combination that had not been celebrated with much fanfare, only two people who never counted the days, the weeks, the months, or the years that went by in their relationship but only knew they were destined for each other. Now marking their 55 years together as husband and wife, what other proof can there be for us to believe in forever?