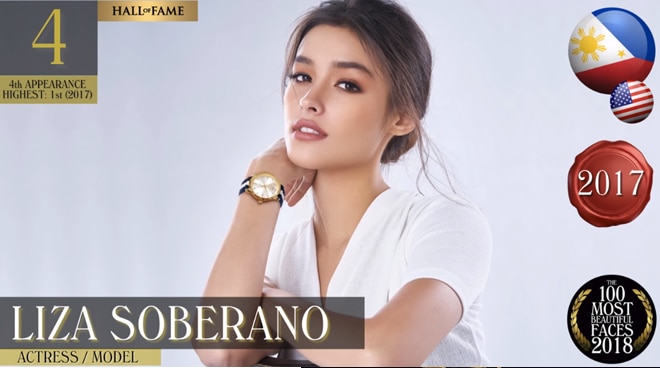 Photo screenshot from: The 100 Most Beautiful Faces of 2018 on Youtube

After topping the British Independent Critics' 100 Most Beautiful Faces list last year, Liza Soberano made yet another record as she earned the Hall of Famer title for appearing in the list for the fourth time in a row.

Liza Soberano landed in the fourth spot with French model and entrepreneur Thylane Blondeau making the top of the list.

Meanwhile, other Kapamilya stars such as Nadine Lustre went up from the 78th to the 70th spot. Likewise, Jessy Mendiola went up from the 71st spot to the 55th spot. Meanwhile, Kathryn Bernardo, who was at the 60th spot last year, didn't make it to this year's list.

Meanwhile, James Reid went 17 places down after debuting at number 4 in the male category last 2017 as he is now on the 21st spot this year. Likewise, Daniel Matsunaga went up from 88th to 39th this year. Enrique Gil, who placed 61st last year, failed to make it to this year's list.

Annually published by TC Candler's The Independent Critics list since 1990, the 100 Most Beautiful Faces list recognizes diverse beauties across the globe based on billions of social media impressions among others.