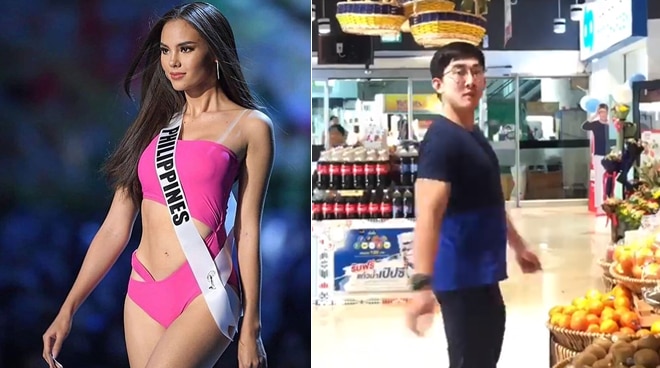 Catriona Gray’s iconic “slow-mo” twirl during the preliminary night of Miss Universe 2018 became viral that it was parodied by other international pageant fans. The video also became a Thai meme that says, “If I don’t text you back, that means I’m practicing my turn like Miss Philippines.”

Bangkok fan Papangkorn Kemjirachote, 32, recreated the walk and made a parody video. The clip already earned more than a million views.

“That twirl is all built by her own confidence — and her great presentation skill. It’s just perfect! Like wow! Otherwise, people wouldn’t be talking about it. It’s just a twirl, but millions of people watch that video!” he told Coconuts.

“My friends know that I often make funny videos, and when I saw her [Gray] from a pageant Facebook page … sorry, because of my gayness, I was like ‘I wanna be like Catriona!’ But making a normal catwalk video is just too normal, so I did the twirls while I went about my daily life — shopping for groceries,” he added.

Papangkorn, who is a musical actor and a street dance teacher, said that his bet for Miss Universe aside from the Philippines was Miss Thailand Sophida Kanchanarin, who made it to the top 10, and Miss South Africa Tamaryn Green, who finished in the second place.