The Moffatts return to Manila for a one-night reunion concert

The Moffatts talk about what they love most about their Pinoy fans. 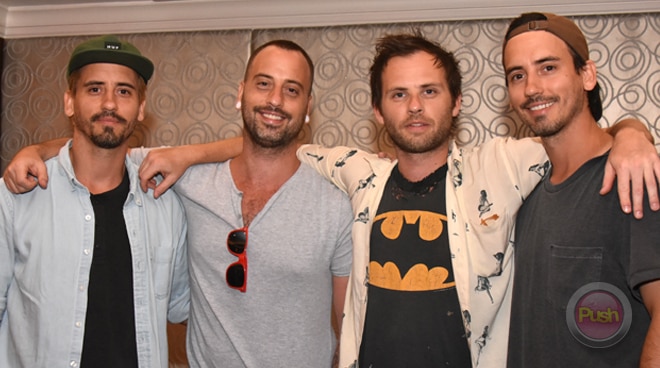 After an almost two-decade hiatus, The Moffatts (composed of Canadian brothers Scott and triplets Dave, Clint, and Bob) return to Manila for a one-night reunion concert on November 30 at the New Frontier theater in Quezon City. Vocalist and eldest brother Scott share that he and his siblings are closer than ever even when they aren’t performing together. “I don’t think we really missed each other because we actually make time to see each other as often as we can. I lived in Montreal for quite a while and I was touring Canada and the East Coast and I would go and stay in Dave a week here and there. We talk to each on FaceTime so it’s not so much that we missed each other but it certainly is wonderful to be around each other all at the same time. There are still skirmishes and issues to be had but I think we enjoy our company pretty well,” he shared during The Moffatts presscon held last November 26.

Having started their 2018 Philippine tour in Cebu earlier this month, the band said they love going back to the country because of the warm hospitality they always receive. According to Bob, “For me personally the feeling that I get whenever I’m here, it’s a relaxed feeling. I think the people here are really positive and they embrace family which is very nice because it’s just a warm feeling when I get here. I believe in energy. I believe when you’re walking around and you pass people you feel that because we’re all connected. So I feel different when I’m in a place like the Philippines.”

Clint agreed with his brother. “Even though the hours on this tour, we put a lot of them in and it’s definitely tiring but on top of that you’re always greeted by amazing people and you’re experiencing amazing things everyday so it makes it completely worthwhile. I agree that it’s one of those places that where my shoulders can drop and I feel comfortable and relaxed. The food is amazing,” he added.

Their fraternal triplet and yoga teacher Dave who was unable to join their tour last year said the local food is one of the highlights of his trip this year. “I love to eat a lot so you can you can see I’ve had a lot to eat here. It’s been a while since I was last here and I was a lot skinnier and now I’m a lot bigger (laughs). But we just actually had a boodle fight a couple of days ago in Cebu and I love boodle fights. I like to eat with my hands. I like communal eating. I like adobo, I like lechon, I really liked it all. I like sisig. I’m a big fan of Filipino food,” he shared.

Eldest brother Scott also shared new Tagalog words they have picked up this year. “I learned a new word this morning, ‘charot’ and ‘dyuskolord.’ We’re not charotting around (laughs),” he added.

For The Moffatts Reunion concert on November 30, Bob said they just want to have another memorable night with their loyal fans. “I think we’re just going to try and have a whole lot of fun. We’re bringing a lot of songs we actually never played even back in the day like ‘Don’t Walk Away’ and ‘Girl I’m going to get you’ which were probably fan favorites. They’re favorites of ours but we just never ended up doing them so we’re going to dive back in the past and we’re going an acoustic part as well. We’re going to try and make it as intimate as we can and just see where the night takes us,” he said.