Rachel Peters has high hopes for Catriona Gray for Miss Universe 2018: ‘She’s going to be awesome’

2017 Miss Universe contestant Rachel Peters says there’s no such thing as being over prepared in beauty pageants. 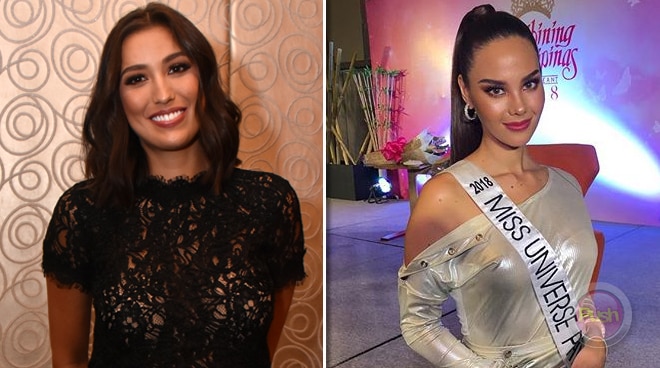 With the 67th Miss Universe pageant all set to happen early next month in Bangkok, Thailand, last year’s representative Rachel Peters said she is excited about the chances of this year’s Binibining PIlipinas-Universe Catriona Gray. “Paalis na siya on Thursday and she looks beautiful. I know if anyone is going to do amazing it’s her. She’s so prepared, as in sobra. Lahat ng mga segments ng pageant, she knows everything about it. She’s prepared and I know she’s going to be awesome. We will all be cheering for her from here,” she sharec after her hosting stint at The Moffats Reunion Tour presscon held last November 26 in Mandaluyong City.

Rachel said that she was also happy to be able to share some advice with Catriona. “I think she took a little bit of advice from all of the former Miss Universes and not just from Miss Universe but also from women who have competed in international competitions. She did ask me a very specific question about a very specific interview which to me, it just showed how dedicated she is because she’s really covering all bases. Honestly I don’t think that you can over prepare for something like that because there’s so many things that happen all the time, unexpected dinners, and unexpected photo shoots. Anyway she’s going to be amazing. She’s so prepared. There’s no such thing as being over prepared when you are a Miss Universe,” she explained.

The statuesque beauty queen said she has full confidence in the Philippine representative this year. “I didn’t know Pia Wurtzbach at the time and I know Pia worked super hard also. But based on everything that I’ve heard on Catriona, we’re working with the same team and I’ve heard that she is going all out for this and I cannot wait to see all of her outfits that she’s worked on and prepared. And also her national costume I think is going to be super bongga. I don’t know what it looks like. I know it has something to do with all around the Philippines so I will be just lie everyone else waiting to see how it turns out,” she said.

She also shared a message for all those who want to support Catriona’s journey in Thailand. “To all the Filipino pageant fans out there, let’s support Catriona. Please always understand that when a girl is out there competing it can be hard being away from her family and having trained and prepared for so many months so let’s just support her. I know she’s going to give it her best. Let’s send good vibes and love all the time and hopefully sana she can bring home the crown for us,” she added.

With her four-year relationship going strong with Camarines Sur governor Migz Villafuerte, Rachel dismissed any possible wedding plans because of the upcoming 2019 elections. “Of course going strong pa rin but elections are in May so Migz is running for governor for his third term and so as he supported me during Miss Universe, of course I want to support him. This is a big thing in his life so we’ll see what happens after the elections,” she said.