Eraserheads has a surprise in time for Ultraelectromagneticpop!'s 25th anniversary

Eraserheads will release a remastered edition of their debut studio album that will be available in digital streaming platforms starting November 23. 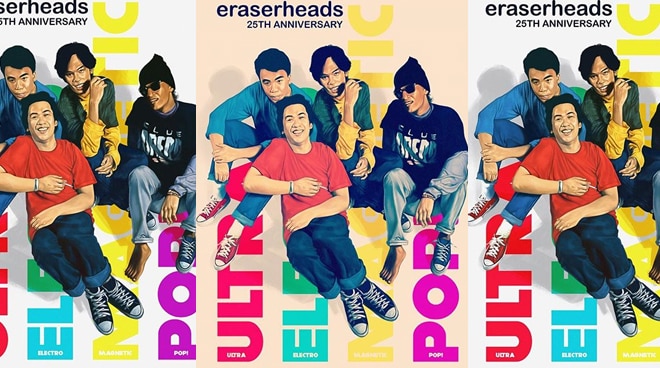 In celebration of the 25th anniversary of one of the most iconic Filipino bands of all time's debut studio album, a remastered edition of the said record is coming our way.

In the last 24 hours, Eheads fans have been trying to decipher Ely Buendia and Buddy Zabala's posts on Instagram. From reunion tour to a new album, fans couldn't stop themselves from guessing what Ely and Buddy have up their sleeves.

But finally, around 6 pm last November 20, the two artists confirmed that a reissue of the group's first mainstream album Ultraelectromagneticpop! will be out in digital streaming platforms starting November 23.

Ultraelectromagneticpop! - the classic debut album by The Eraserheads celebrates its 25th year with a remastered edition by Bernie Grundman, legendary audio engineer. Relive the memories of this groundbreaking Filipino music milestone. Out on Friday, November 23 on Spotify and other digital streaming platforms! Brought to you by Sony Music Philippines and Offshore Music. #ULTRA25 #OffshoreMusic #SonyMusicPhilippines #BernieGrundman #Eraserheads #Ultraelectromagneticpop!

Some of the songs from Ultraelectromagneticpop! - which first came out in 1993 - include Filipino all-time favorites such as "Toyang," "Shirley," "Tindahan ni Aling Nena," "Ligaya" and "Pare Ko."

Though the group has decided to part ways in the early 2000s, they still held shows locally and abroad.