Giselle Sanchez, who hosted the fan meeting, got to hug Lee Jong Suk on stage. 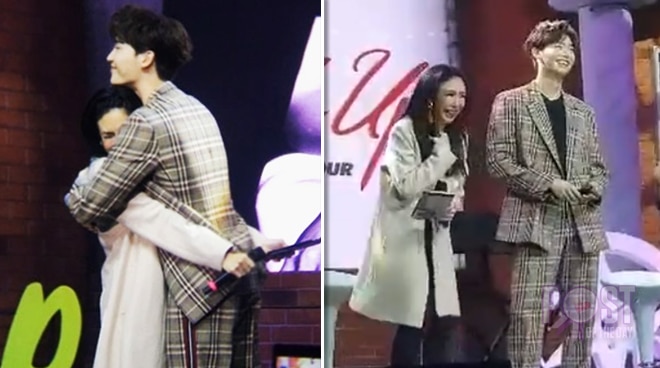 Actress-comedian Giselle Sanchez has always been vocal about being a fan of Lee Jong Suk. Three days ago when she met with promoter and PULP Live World owner Happee Sy-Go to pay for her tickets, she received the exciting news from the latter that she was going to be the host for the fan meeting of the South Korean actor.

Watch the video below to see her reaction:

@happeehour filmed my reaction and i’m still in denial, OMG ! I was in her house about to pay for the tickets I reserved for the #crankupfanmeeting Tomorrow with @jongsuk0206 at the #smartaranetacoliseum When she asked me to host it. That means I get to be with @jongsuk0206 onstage!!Waaaah! #fanmode pa rin ako! I’m still in shock! Waaaaah!!!! @maymay baby sis!! Diba like mo itong si @jongsuk0206 sa serye niya #whileyouweresleeping ? #leejongsuk #leejongsukinmnl

Though she tried to keep things as professional as possible when she finally set foot on stage, Giselle wasn't able to contain her emotions upon seeing Jong Suk on stage and eventually fell to the floor out of excitement.

"My knees were trembling, I couldn’t stand up, Thank you @jongsuk0206 for making it easy for a fan like me to host your #leejongsuk #crankupfanmeeting in Manila," she wrote.

"@jongsuk0206 I represent every fan in #crankupmanila wanting to hug you. How I wish each and every person inside #aranetacoliseum could get a hug from you just like I did. It was an honor to be your emcee last night," she wrote in another post.

She then added: "How I wished my fellow actresses who are your fans like @maymay @annecurtissmith & @bela could have joined me onstage so I could have had the chance to breathe or cry."

Lee Jong Suk is the actor behind hit K-Dramas such as While You Were Sleeping, W, and Pinocchio.