Derek Ramsay on CarGel: “I hope the rumors are true na nagkabalikan sila”

Derek and Angelica dated for more than five years. 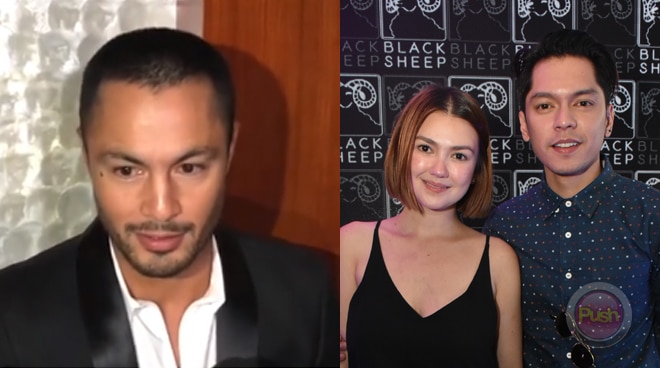 Derek Ramsay’s interview with the press about Carlo Aquino and Angelica Panganiban’s tandem has recently gone viral. Derek, who dated Angelica for more than five years, said that he is also hoping that that rumors of ‘CarGel’ getting back together would be true.

“I hope so, I always said that I hope Angel would find the right guy and they used to date each other before. Carlo used to come to the house when Angel and I were dating back then so kilala ko si Carlo,” Derek said.

“I’d be a fan. They really, really look good together, they’re sweet together. I hope the rumors are true na nagkabalikan sila,” he added.

Derek also commended the success of their movie Exes Baggage.

“I heard they did really well, hindi ko pa napapanood pero I want to see it. I heard a lot of great things about the film,” he said.

When asked if he is still friends with Angelica, Derek said that they, “Talk but not much.”

Derek Ramsay on Carlo Aquino and Angelica Panganiban: “They look really really good together. They look very sweet together. I hope the rumours are true” 🖤 #angelicapanganiban #carloaquino #derekramsay #cargel #cargel4evs

Angelica dated Derek for more than five years then she dated John Lloyd Cruz. After her split with the actor, she is now romantically linked with Carlo, whom she dated during her younger years.

Currently, Derek is in a relationship with a non-showbiz girl named Joanne Villablanca for over two years now. In his previous interviews, he has expressed his desire to settle down with Joanne soon.