Liza Soberano answers questions about her and Enrique Gil on Twitter. 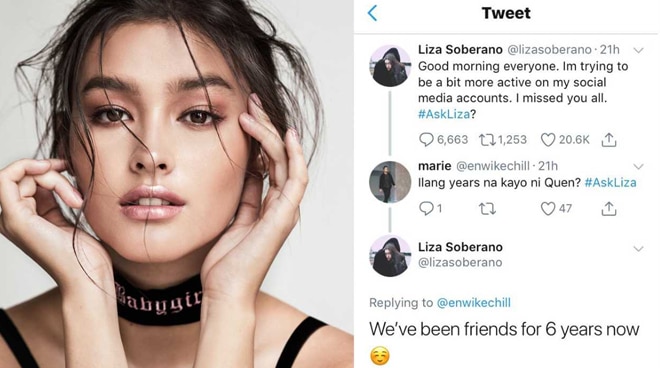 On Sunday October 28, Darna lead actress Liza Soberano started a Twitter Q&Ap to make up for being inactive on social media lately. She tweeted, “Good morning everyone. Im trying to be a bit more active on my social media accounts. I missed you all. #AskLiza?”

Good morning everyone. Im trying to be a bit more active on my social media accounts. I missed you all. #AskLiza? The netizen tried to give a follow up question. “Eh jowa?” the netizen added, pertaining on how long since Liza have Enrique Gil as her boyfriend, assuming they were official. However, Liza skipped the question and answered others. Just last October 25, Liza and Enrique shared photos on instagram as they celebrated the anniversary of Forevermore, their first teleserye on ABS-CBN.

Another question that Liza took time to answer was from a netizen asking, “If you were given a chance to work with someone who is under rival network who? And Why?” Aside from the much-awaited Darna remake, Liza Soberano is teaming up with her Enrique i a movie with director, Antoinette Jadaone, under Black Sheep Productions.