Paolo Valenciano on directing Mitoy Yonting and The Draybers: ‘They are the ultimate rock stars’ 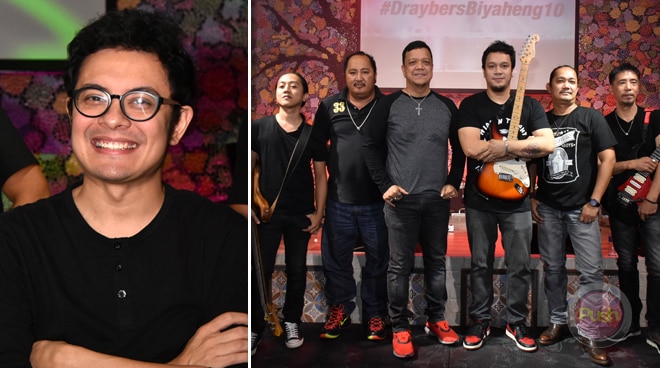 Now that he has declared that he is directing full-time, Paolo Valenciano said he was excited to work on Mitoy Yonting and The Drayber’s 10th Anniversary concert at Resorts World Manila. “The moment they told me about the project I already knew exactly what I wanted to do. I think it’s no secret that when you pass by Bar360 and you hear them playing you notice that they really have a strong following and everyone, even when they don’t know about them, when they pass by the bar, they end up stopping and watching. I believe the group has such global appeal in terms of the tightness of the music and their talent,” he shared.

Paolo said he admires the talent of local bands like The Draybers who started playing from scratch. “Yung quality ng music nila pag tumutugtog sila parang sobrang timeless niya. And I think that’s the thing that I really enjoy when I watch Mitoy perform, it’s such an experience and I think you will appreciate their music because of the skill. I love working with really good performers because there’s a lot more that I can do with them and it wasn’t hard to accept the project. When you put them in any place that has gaming involved, there are lots of guidelines, lots of rules. I think for this concert what I really wanted to do was to sort of unleash the band. I believe that they are the ultimate rock stars and they should be treated that way,” he explained.

For those who will watch the special one-night only concert, Paolo said they can expect a world-class performance. “Those who will enjoy this are their loyal followers who have been seeing them in these establishments, I believe that if they come see this concert they’re going to feel like they’ve been part of this magical experience. I think this is the first step into introducing them into the world stage. Who knows, other producers, other groups might come and see them and they will realize that this group The Draybers does have global appeal. You can put them in Europe, you can put them in Asia and people will listen,” he added.