Air Supply on Pinoy singers: ‘They’re probably the best in the world!’

Iconic Australian band Air Supply returns to Manila for the international premiere of ‘All Out of Love: the musical’. 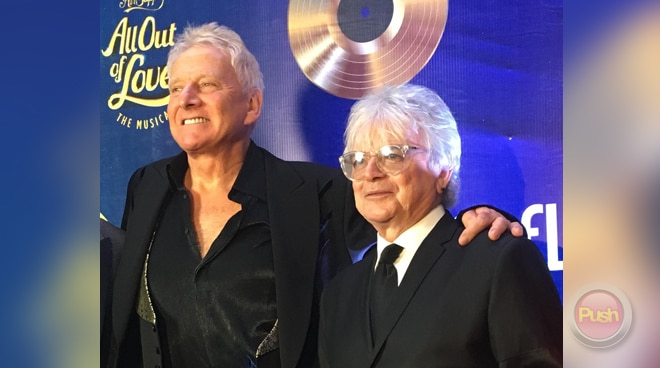 With the opening of All Out of Love: The Musical, Air Supply, the Australian band from whom all the production’s songs were based from, flew in just to attend the gala night held last October 20 at the Newport Performing Arts theater in Pasay City. Air Supply members Russell Hitchcock and Graham Russell said they have been to the country more than 20 times already since 1981. “We’re really happy to be here in Manila. We’re very happy that our audience is going to find this wonderful new show. It’s a great show and we’re going to have a lot of fun and everybody should have a lot of fun. Lots of great fun and songs, dancing and jokes and lots of incredible talent,” said Graham Russell during the All Out of Love gala night at Resorts World Manila.

Vocalist Russell Hitchcock said that having a musical based on Air Supply songs was something they always envisioned. “For quite a few years from this point backwards, we thought the music would lend itself to be in this arena. Graham writes beautiful songs and each one on its own tells a story. So when you can link 10 or 12 or whatever it is there is in the show together and make a beautiful story and have those songs incorporated is fantastic. It’s been really strange for me to see somebody else sing songs that I’ve been singing and Graham’s been singing for so long and that also shows their interpretation and the sound of their voices. But I was hooked as soon as the show started. It’s just a wonderful production with great talent,” Russell said.

The musical features an all-Filipino cast led by world-class talents Mig Ayesa and Tanya Manalang. “We have so many fans here and we love it. That’s why we keep coming back. And also because the singers here are incredible. They’re probably the best in the world. Every Filipino can sing which is a great thing. Their vocals are incredible here. You also have an incredible group of artists who live here so there’s an amazing talent base to do a new production with. There’s singers, there’s dancers, there’s actors. You have a lot of stars that really could carry and do something like a Broadway musical and bring it to life and that’s not true of very many places in Asia and what an incredible fanbase is here for Air Supply so those things combined really make it a perfect place for a premiere,” Graham explained

After more than four decades of making music, the Australian band shared how they have managed to withstand the test of time. “We don’t really have one, that’s the secret. We love what we do and we love performing together and recording together. We have a great respect for each other’s talents and as human beings we just always enjoy what we do tremendously. And we get more enthusiastic as the years go by, as our fans continue to grow in age and in number. It’s just a wonderful life we have with Air Supply,” he said.

All Out of Love: The Musical runs until October 28 at the Newport Performing Arts Theater in Resorts World Manila. Tickets are available at the RWM Box Office and Ticketworld outlets.