Regine Velasquez on transferring to ABS-CBN: ‘It was really me who decided’

The Asia’s songbird signs contract with ABS-CBN today and is now a certified Kapamilya. 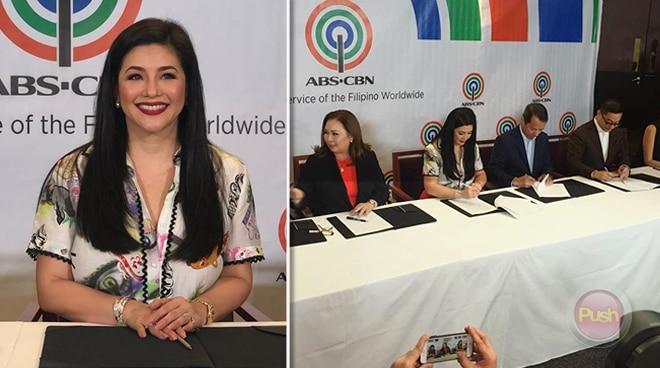 Regine Velasquez signed a contract with ABS-CBN on Wednesday, October 17. The Asia’s Songbird received a warm welcome from the executives and the employees of the station as she officially becomes part of the Kapamilya network.

Regine remarked that transferring to ABS-CBN was her decision and not Ogie Alcasid’s, contrary to the rumors. “You know, I just want to clarify because people have been blaming him that this was his idea, actually hindi. It is really my idea. I did ask for his help. I know tita Cory (Vidanes), I know all of them here pero I asked for his help if I he can set up a meeting with them. But it was not his idea. It was really me who decided. Tsaka if you know me like my husband knows who I am, you know na gagawin ko kung ano ang gusto ko,” Regine remarked.

According to the singer, her previous co-workers from the other network have been very supportive of her decision. “You know they are happy for me and they understand. My sister and I are still in touch with them. Kinakamusta nila ako. They are happy, they are genuinely happy for me so ako I only have gratitude. I am so grateful to them. Twenty years ‘yun, inaalagaan nila ako. I am so grateful,” she stated.