ASAP announces that Regine Velasquez will be joining their show in Sydney, Australia on October 20. 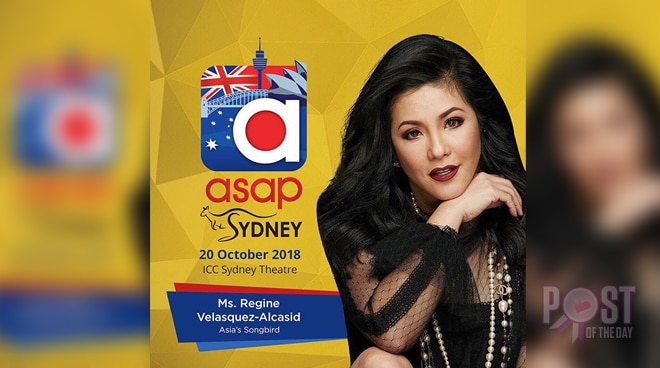 In a surprise announcement yesterday, October 12, noontime variety show ASAP posted on Instagram that Regine Velasquez will be joining their stellar line-up of performers at their special show in Australia.

Happening on October 20, Regine will be joining other Kapamilya stars amidst rumors of her network transfer. The singer has been identified with ABS-CBN's rival TV station GMA in the span of her 30 year career in show business. However, this yet the only appearance of Regine on the Kapamilya network.

Since the transfer of her husband Ogie Alcasid and other fellow singers Jaya and Janno Gibbs to ABS-CBN, Regine has been asked numerous times about the matter. The Songbird was mum on the matter but speculations became louder when she appeared at the recent ABS-CBN Ball last September 29.