PUSH PINS: Why Vicki Belo and Hayden Kho’s wedding is one of the most lavish nuptials in PH showbiz ever

Vicki and Hayden celebrated their union with an extravagant wedding in Paris, France. 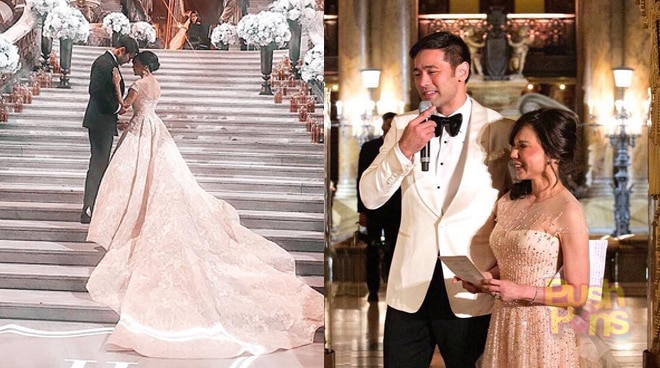 Celebrity doctors Vicki Belo and Hayden Kho’s nuptials will definitely go down in history as one of the most memorable weddings in Philippine show business.

Aside from the couple’s colorful love story, not to mention Vicki and Hayden’s 24-year age gap, the two celebrated their union with an extravagant wedding in Paris, France over the weekend.

On Sunday, September 3, the two exchanged vows at The American Church in Paris.

Standing before our Father, in front of my husband and everyone dear to our hearts--This photo sums up everything I wished our wedding would be. And I couldn't thank you enough, @michael5inco for the amazing wedding gown. Even from afar, you made me look like the perfect bride ♥️Sharing with everyone Michael Cinco's description of how my dream wedding gown was made: • @michael5inco: The couture exquisite details of the 3-meter long train blush wedding gown of the very beautiful bride VICKI BELO @victoria_belo is made of French lace and tulle with full silk embroidery on top in baroque patterns with sequins, pearls and transparent and Rose Opal Swarovski crystals... And it took 1000 hours to finish with 50 skilled artisans...@sayed5inco @dochayden @cristallebelo @scarletsnowbelo @belobeauty @emirateswoman @vogueparis @lovinghautecouture @thecatwalkitalia @couturenotebook @asiancouturefederation @couturissimo @fashionpulis #couture #wedding #belobride #PinayBride #aKHOandmyBELOved #ParisOpera #Paris #Dubai #MyDubai #MadeinDubai #MichaelCinco

Vicki wore a meticulously made Michael Cinco gown. “The 3-meter long train blush wedding gown is made of French lace and tulle with full silk embroidery on top in baroque patterns with sequins, pearls and transparent and Rose Opal Swarovski crystals... And it took 1000 hours to finish with 50 skilled artisans,” the acclaimed fashion designer shared on his Instagram page.

A lavish reception then followed at the grand opera house, Palais Garnier – the inspiration for the musical play Phantom of the Opera. Michael, who was present at the venue, said that the venue closed for two days just for this event.

Palais Garnier took our breaths away but it was the wedding celebration that won our hearts . Thank you to everyone who helped us make this wedding possible . #aKHOandmyBELOved

Still on a wedding high. Thank you everyone who came and celebrated with us last night. Our hearts are full from all the love ♥️ #aKHOandmyBELOved 📸by @michael5inco

Literally a scene from Beauty and the Beast. Look at this dining room 😱 #aKHOandmyBELOved

Let's see if you can spot all our favorite @belobeauty babies in these photos! Swipe right 🌟 #aKHOandmyBELOved #BeloBaby

These guests were also at their best. As such, cousins Georgina, Isabelle and Jess Wilson wore wedding gowns.

The most grandiose venue ever!! Feel a bit under dressed in my wedding gown 😅🙌🏾 #aKHOandmyBELOved

Aside from opera singers, Ogie and Regine also serenaded the couple.

These two "weren't ready daw! 😂" did you guys know that @reginevalcasid is @victoria_belo's longest celeb patient? My ninong @RonnieHenares (her previous manager) brought her to Dr Belo when she was just a teenager. It was so entertaining seeing these two lovebirds hosts! It was so special coz it was apparently @ogiealcasid's first time in Paris!💖 #aKHOandmyBELOved

The guests obviously enjoyed the delightful dishes served at the reception.

To make their first dance as a married couple extra special, Vicki and Hayden danced to their own recording of Jekyll and Hyde’s Take Me As I Am.

We passed our first challenge as newlyweds. High five to us, @dochayden! TRIVIA: The background music is 'Take Me As I Am' from the soundtrack of Jekyll and Hyde and... the singing voices you hear are Hayden and I. We recorded the song because we want our first dance to be really special and personal ♥️ #aKHOandmyBELOved

Throughout the night, the newlyweds, together with their guests, enjoyed dancing to the music played by a live band.

The night prior to the wedding and reception, Vicki and Hayden hosted a river-cruise dinner rehearsal for their guests, on board the Pavillon Seine, where people could enjoy a good view of the famed Eiffel Tower.

Tonight, we formally welcome all our loved ones as we cruise along the River Seine to celebrate our once-in-a-lifetime kind of love. Tomorrow, we are officially made one before our Father. Thank you for sending us your blessings and prayers ♥️#aKHOandmyBELOved 📸@marchenrichgo

At last night's Welcome Dinner on board the Pavillion Seine. I think I'm telling @dochayden I'm a little bit nervous 😅 and he assured me everything will be fine. Today, we finally start another journey in our relationship ♥️ #aKHOandmyBELOved #BigDay

Sometime during their weeklong stay abroad, Vicki also gave a tour of their equally luxurious hotel room on Instagram – the historical room of French fashion mogul Coco Chanel at the 5-star hotel Ritz Paris. According to their website, a one-night stay in Coco Chanel’s room costs at least 18,000 EUR or an estimated 1.1 million PHP.

The #ritzparis is steeped in history . #coco Chanel lived here. She is credited with Paris being the only city not bombed by the Germans during THE WAR. because the head general in charge of Paris and coco had a relationship . She made him fall in love with the beauty of Paris so he protected it from bombing #akhoandmybeloved

Meanwhile, photos and video clips of their creative invitations were also posted online.

In Philippine Tradition, the groom's name goes first. Doc H @dochayden, however, opted to put Dr. @victoria_belo first. Aside from design symmetry, it was a very gentleman gesture. Ladies first as they say. Just like @cristallebelo and @justinpitt77 💞☺️ IN HONOR OF GOD 🙏 No words will ever explain how grateful I am to have been able to produce this for Dr. @victoria_belo and @dochayden 💞 Here's to more logos that last a lifetime 💞Amazing Illustration by @muchachadiaries : Trish Gesilva- Ong | @robert_alejandro | @direkjavi #EternalLogos (Wedding after wedding, design after design -- I still get the same exhilaration when I see .AIs/.PDFs from an RGB screen come to life!) | Paper : 350gsm Ivory Woodfree | Bevania Splendorgel Ivory 350gsm | Printing Process : 4CMYK; 2 Color Deboss + Foil Stamping | Photo from Dr. @victoria_belo's Instagram ☺️

Map i did for Hayden and Vicki invite / Paris wedding! Wishing them a lifetime of love! #aKHOandmyBELOved

Every guest had this on the back of their hats : 48.8720 N , 2.3316 E. The coordinates of Palais Garnier. The invite didn't reveal the reception and this was one of the clues. Fairytale indeed! ❤️ #akhoandmybeloved

His will, indeed, includes you @dochayden and you @victoria_belo ☺️ Wedding design etiquette says punctuation and capitalization differs in writing for invites. Thanks for the help Ate @trunity 💞

A few days before the wedding, Vicki gave her Instagram followers a closer look at her engagement ring, which was made by Graff Diamonds, a London-based luxury jeweler.

The engagement ring is beautiful but what's more beautiful is the love story behind it. 9 more days 'til we say I do ♥️ #aKHOandmyBELOved #belobride #RoadToIDo