Billy Crawford reveals his exciting new plans after his next album. 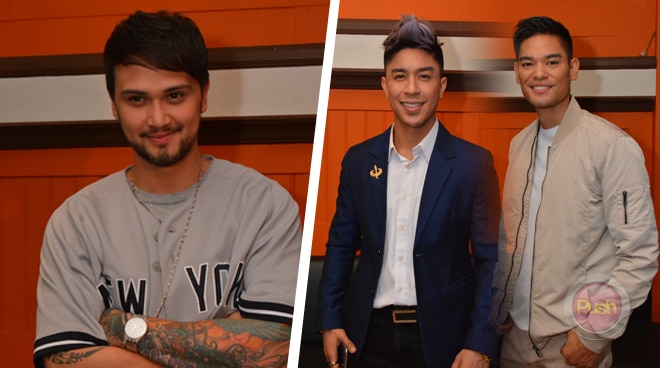 All set to perform in their much-awaited one-night only concert Soul Brothers on September 15, Kris Lawrence said this was a long awaited reunion on stage for him, Billy Crawford, and JayR. “Ang tagal namin gusto i-mount ito. Since 2009 or 2010 we’ve always been talking about it nauna lang sa Guam and now finally now na-mount yung dream concert namin. One thing is for sure, everyone that is watching will have a great time. It will be a party for sure,” he shared.

HomeworkZ producer JayR admitted he is happy ro be performing with his real-life close friends in Soul Brothers. “Timing mag-concert ngayon. Gusto namin lagi nag-po-promote ng music namin and with the concert we’re able to promote our individual singles, our TV shows, it’s in line with everything that we have to do now, sa lahat ng mga ginagawa namin. So sakto yung timing ng concert. We have G-Force to back us up. Talagang tinututukan ni Teacher Georcelle yung mga sayaw namin. Of course Kris is a great dancer and Billy is the dancer. Makikita niyo yung mga dancing talaga. Excited kami to see the reception from the audience kasi,” he shared.

Although busy with his new show Little Big Shots, Billy said he really prioritized time for the concert. “Kinakaya ko. It’s quite busy for now but to be honest I’m not complaining. I’d rather be doing what I’m doing than yung wala akong magawa. So it’s really more of a blessing now. Naintindihan naman nila kung medyo pagod ako hindi ako makasama paminsan minsan sa meetings and what not kasi I’m filming din everyday for Little Big Shots so medyo nakakapagod, actually nakakapaos so yun yung problema ko. Pero the reason why I’m doing it naman is because kasama ko naman itong dalawang gunggong na ito so I’m happy with them,” he said.

Aside from the concert, Billy also revealed that he has exciting plans ahead that will also include JayR and Kris. “I haven’t told these two guys pero ilang taon ko na pini-prepare yung album ko. As in it’s going on eight years or something like that. But as soon as I’m done with this one I think I have a new calling for a new type of music and they will be involved I’m sure because this is something that I want to address not just in the Philippines but I want this to actually be worldwide. And it’s something that just happened recently in my life so I’m quite excited for it. Patapos na ako dito sa album na nagawa ko. I’m actually more excited about the next one coming after that. So I hope it will go as planned,” he said.

JayR couldn’t help but share the sacrifices Billy made for the show. “Ang kaibigan naming si Billy is the most hardworking guy in showbiz in the Philippines ngayon. Like everyday talaga may show siya, taping tapos aside from that may recording pa kami, may rehearsals pa, may mga plano pa, and lahat yun kahit wala na siyang energy, he makes time for that. Mahirap talaga to make time for everything pero for most of it he makes time for it. We just want to give this guy a pat on the back because he’s working so hard talaga,” he added.

Billy admitted that he is proud of his real life soul brothers and their show. “It will be a full on concert. This is a time na puwede namin ipagmalaki. It’s for all ages. Families can actually watch,” he said.

Soul Brothers will have guest performers Sam Concepcion, Jay Durias, Gloc 9, and Daryl Ong. The concert will also be staged in various cities in the U.S and Canada in October. The Souls Brothers concert is produced by ALV Events International in cooperation with HomeWorkZ Music.