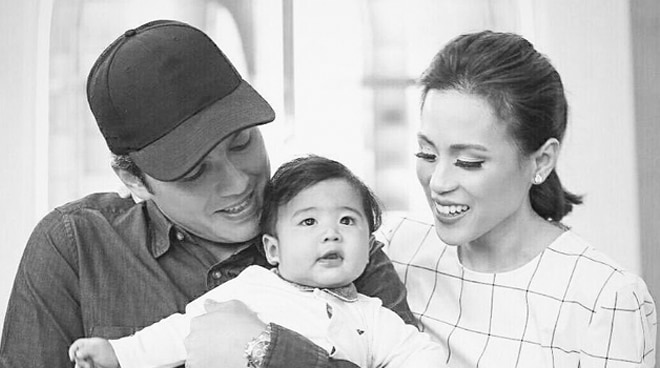 As their first baby Seve turns ten months old this next month, Toni Gonzaga and Paul Soriano admitted they have really become hands-on parents. “Meron kaming conscious effort to see to it na one of us should be there. Hindi puwedeng pareho kaming wala. Or may family members ako sa bahay or yung brother ni Paul will be there to watch Seve. Lagi siyang may family member na kasama. I’m very blessed to have my second set of parents na talagang very hands-on, very loving, and very helpful to us,” Toni shared during their launch as celebrity ambassadors of Gold Seas Tuna Chunks held last July 25 in Taguig.

Sharing parenting duties has strengthened Paul and Toni’s love for each other. “Well I never truly and fully understood how much I really love Paul until I saw him love our baby. Parang dun ko na-realize, ‘Aww si Seve ang nagsemento ng pagmamahal.’ Nakita ko kung paano niya minamahal si Sevi at inaalagaan. So mas nag-grow yung admiration and respect and love for him,” Toni explained.

Her husband said he sees Toni’s effort for Seve. “What I appreciate about Tin (Toni’s nickname) naman is no matter how hectic her schedule is with the movie, ASAP, The Voice, and her commitments, she still puts Seve on top of the list. Ako I sleep on the floor na (laughs) but that’s just how much she loves Seve and it’s also made me love her even more, the mother of my son. So it’s protecting my son, it’s protecting her, and it’s protecting my family,” Paul added.

Paul said he just enjoys being a fun dad when bonding with his firstborn. “It’s part of the marriage. I think it’s what makes the marriage work and it’s always a work in progress. But most of our tampuhan is about Seve. Kasi I’m very rough with him and she’s like, ‘Oh he might get hurt.’ But we’re boys so you have to let us be. She disciplines the boy and I’m more of the play, fun, you know. So she has to try and calm us down. But we’re boys just being boys so she just needs to get used to that. But I’m very protective over Seve. Hands on to the hands on,” he explained.

When it comes to raising their kid, Toni said she and Paul have both agreed that they will not spoil Seve. “It’s a challenge to not give your son what he wants when you know you can give him what he wants. It’s a discipline not just for our son but also for us parents. We’re learning to discipline. At saka yung tigilan yung pabili-bili ng toys. Yung mommy at daddy ko pag kinuha talaga nila may toy pero last na yun. Laging last na yan. Ayoko siyang masanay na every time na umaalis merong nabibili kasi nung bata naman kami tuwing mag-mo-mall kami hindi naman namin nabibili lahat. So gusto ko in a way ma-experience niya yung ganun, yung hindi lahat ng bagay sa mundo makukuha mo kasi in real life hindi naman talaga ganun,” she said.

Paul explained they have to teach Seve discipline at a young age for his own good. “Like for example just the other week we had to put him in a car seat now when we travel. Every time we put him in the car seat he cries all the time. Because of course he wants to go to us but you know you’re in traffic and he’s crying and we both want to get him but we know we need to make sure that he’s safe. So mga ganun, it breaks our heart but we have to accept it.”

As Seve celebrates his first birthday on September 30, the couple said they want it to become a special tradition for their family. “Well actually his first birthday is not just a celebration of his first but also a celebration of us as parents na parang we want to celebrate it as a family. So that’s how we want it,” she shared. Paul says he wants to give his son fond memories to look back on when he’s older. “Now that September 30 is officially a holiday in our household for the rest of our lives. But the first birthday is going to be special. We’ll throw a fun party for Seve and I think maybe he won’t know now but when he looks back he’ll know that’s how we celebrated it and he’ll see how loved he is,” he said.