Noel Comia Jr. admits he has always been comfortable acting on stage. 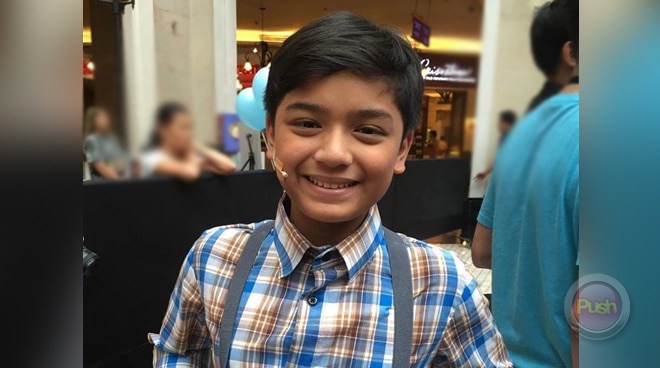 After besting older and more veteran performers in the recently concluded Cinemalaya, child actor Noel Comia goes back to his theater roots in the upcoming production of the UK award-winning play Chitty Chitty Bang Bang. Noel said he auditioned for the play even before he became part of his indie film Kiko Boksingero. “It was quite hard but not really that hard because I’ve done a lot of theater shows before this. I was six or seven years old when I started doing theater. I watched some clips from the movie and it was nice, fun, and exciting,” he shared during the Chitty Chitty Bang Bang trade launch event held last August 17 at Resorts World Manila.

Even after unexpectedly bagging the Cinemalaya Best Actor award, Noel said his life is pretty much the same except that he sometimes gets recognized when he is out in public. The talented young actor is currently a full time grade 7 student at OB Montessori in Greenhills where his favorite subjects are Music, Filipino, and math. The 12-year-old actor also loves playing instruments like the piano, guitar, ukelele, harmonic, violin, and the bamboo flute.

“After I won the award, all my friends congratulated me and said I did a good job. Nothing much has changed. I still remain the same way that I’ve been and I’d like to retain that sort of attitude so that I don’t get an attitude. I have been getting a lot of offers by some people but I’m not sure if we’re accepting it because I would like to focus on my studies,” he revealed.

When it comes to acting, Noel said he has always looked up to The Voice coach and Broadway star Lea Salonga. Noel said he does not have a dream role yet but is happy to have gotten the opportunity to play two very different roles this year. “In Kiko Boksingero kasi I’m in kind of a state of depression and I’m searching for my identity. In Chitty Chitty Bang Bang I think my role is very exciting and fun because it’s all energetic and my character works with a team and he’s not really searching for something. He’s not depressed. He’s a happy guy and he’s a very smart guy,” he explained.

Watch the talented all-Filipino cast of Chitty Chitty Bang Bang at the Newport Performing Arts theater in Resorts World Manila when it opens this October. For ticket inquiries please call (632)908-8833.