Enzo Pineda and Rocco Nacino share why it took them two years to make the movie. 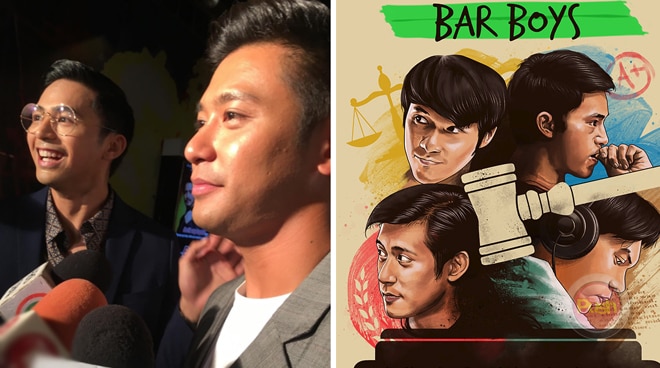 The film which revolves around the lives of a group of friends who enter law school actually took writer and director Kip Oebanda two years to finish. “It brings back a lot of memories kasi two years in the making ito eh so makikita niyo na iba talaga yung itsura namin dito and we look like fresh students going through law school talaga. The experience of doing this film was actually very different for me lalo na kapag ensemble cast tapos lahat kami may different objectives. Maganda yung pag-atake ni direk Kip (Oebanda) dito. It brought out a different side of me and Enzo (Pineda),” Rocco explained.

Enzo, who plays top honor student Chris in the film, said Bar Boys is not out to compete with the usual romantic comedies or dramatic movies which are popular in showbiz. “I think it’s something different compared to the recent movies that we’ve been watching. It’s a barkada film and sobrang tagal na hindi na gumagawa ng mga pelikulang ganito. It’s something very relatable lalo na sa mga students and also to everybody. So dapat talaga siyang abangan because it’s very unique, very relatable, and at the same time it shows a different side naman of Philippine cinema. I think as an actor the challenge was learning how to be a law student. Kasi it’s really a big shoe to fill so for me and Rocco we really had to study our role and it’s actually a fun movie kasi sobrang iba yung atake ni direk Kip and we just really had fun doing it and ang laki ng experience and knowledge na nakuha namin dito,” Enzo shared.