EXCLUSIVE: Phoemela Baranda is excited to be part of her first international reality show 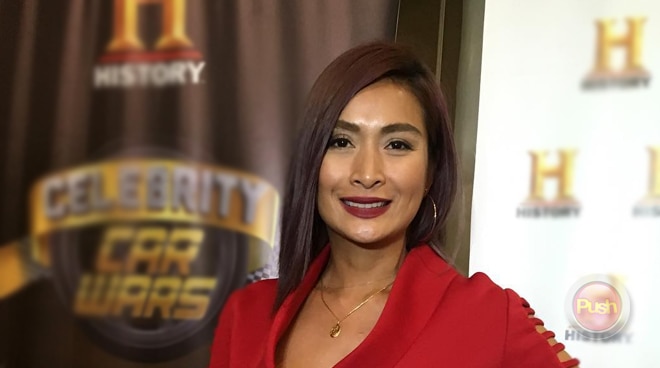 As part of the second season of Celebrity Car Wars, Phoemela Baranda admitted she is already very comfortable behind the wheel. “I really have a background with racing for Vios Cup. I did circuit car racing but for this show we did anything with four wheels. So it’s not just cars. There’s ATV, 4x4 adventure off road car, trucks. I like the adrenaline rush. I like the speed. Yes I need speed (laughs). When they invited me for the show, I was very, very happy and so excited because I really love racing and of course when they told me it was going to be like a ten-day shoot and we’re going to be far that’s when I realized it’s really going to be hard. Mahirap ito (laughs). We’re two girls in the show. The other girl is Erin she’s an actress in Thailand,” she shared during the History Con 2017 press conference held last August 10 in Pasay.

During her shoot for the History Channel’s automotive reality series, Phoemela went up against other Asian celebrities in a competition where their driving skills were tested. Phoemela revealed she experienced her first and scariest car crash during shooting. “It’s normal to crash in a race but it’s my first time to crash. We were subjected to different challenges that was our first time to do. I mean they were saying I might have an advantage because I do circuit car racing but it’s not just about driving skills. It’s about everything, your discipline and your determination so I guess this is going to be a totally different show,” she explained.

As part of Viva’s roster of talents, Phoemela said she really prefers doing reality shows over acting in showbiz. “I started my career hosting with a reality show before Extra Challenge so I really loved doing reality shows and I missed it. I hope you guys would watch this show because it’s a reality, adventure, drama, everything all in one. And I think lalabas dito yung other side of Phoem ulit (laughs). I’m still doing showbiz but reality show is different and I guess this will open a lot of doors for me. It’s my first international show which is going to be shown on History Channel Asia and I hope I reach the other viewers around Asia so I’m very excited,” she shared.

At 36, the mother of former PBB All In teen housemate Kim Nichole said she has no big secret to her ageless beauty. “I’m low maintenance actually. I just want to do what makes me happy. More on inner happiness. Talagang I love going under the sun which is sabi nga nila masama sa skin but I really love sunbathing and tanning so just do whatever makes you happy, ayun,” she said.

When it comes to her personal life, Phoemela said she is happy with her daughter and has no plans to settle down yet. “Well I’m still dating. I’m not yet married but of course one day I want to settle down. I already have Kim my daughter so maybe I kind of feel like I have a family already but maybe one day I’ll get married we’ll see. When I’m dating someone we always wish that person is Mr. Right. You’ll never know but my heart is always open,” she added.

Celebrity Car Wars airs on HISTORY every Monday at 9:55 PM starting September 4 . Watch HISTORY on SKY on channel 67 and in HD on channel 165.