VIRAL: This guy is asking Erich Gonzales for a coffee date via a billboard and confesses his feelings for the actress online

This story will give you major kilig vibes. 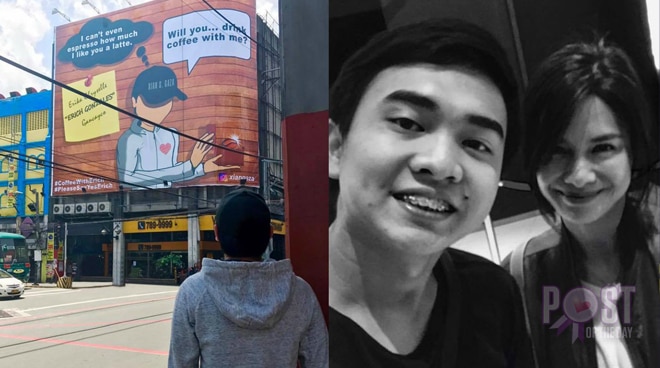 Netizen Xian Gaza did something for the first time in Philippine history just to ask a girl for a coffee date. Much to the amazement of many people online, Xian paid for a billboard to ask Kapamilya star Erich Gonzales to have coffee with him. The post has already earned 12k likes as of this writing.


On his Facebook post today, Xian explained how he met Erich Gonzales and how he has been mesmerized by the actress ever since their paths crossed.

He posted, “Last January 5, I was so down and demotivated with life while nursing a broken heart. So I have decided to take a much-needed walk towards SM Aura's chapel, crying while praying, desperately asking for some divine strength and guidance then went down and decided to book a flight to Hong Kong immediately the next day to unwind and breathe some air.

“Afterwards, I jumped off to Uptown Mall Cinema to watch the last full show of ‘Assassin's Creed’ and much to my surprise you were seated right there in front of me along with some other four [people]. After the movie, I mustered all courage I had up my sleeve in order to approach you and took this very selfie so that I may remember that magical moment. You, being kind, happily obliged. At that moment, you had left a massive imprint on my heart. You left me mesmerized.”

Xian confessed that Erich has been his source of inspiration for half of the year now. “Maybe some are even questioning who this crazy ugly piece of shit is but I won't give a F so long as I believe that happiness is the greatest form of success, and right now, thinking of you really gives me genuine happiness, I mean it. I really hope to meet you soon, Ms. Gancayco. And above all else, thank you very much for unknowingly making me smile and inspiring me in each passing day for the last half year,” he wrote.

Erich has yet to respond to his offer as of this writing.