The five members also had individual performances that showcased their talents. 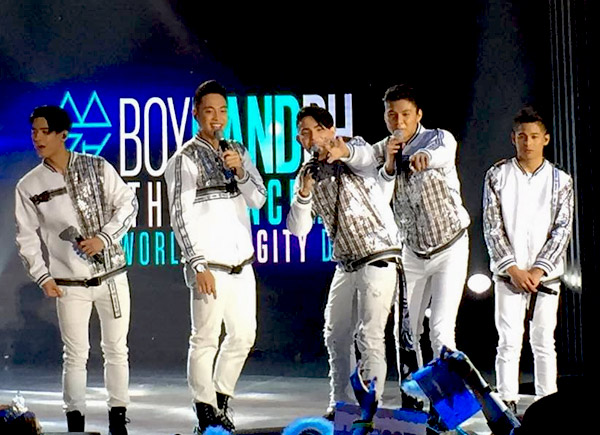 Last night, May 7, super fans all over the world tuned it to the first ever concert of BoybandPH produced by One Music PH. Joao Constancia, Tristan Ramirez, Niel Murillo, Ford Valencia and Russell Reyes entertained their avid supporters with their renditions of songs such as Ed Sheeran’s “Shape of You,” Kanye West’s “Stronger,” and Daft Punk’s “One More Time.” The country’s hottest boy band also spread unli kilig when they performed their songs such as “Unli,” “Boyfriend,” “Magmamahal,” and their chart-topping hit “Somebody.”

The five members also had individual performances that showcased their talent: Ford serenaded the audience with his heartwarming rendition of Sud’s “Sila,” Tristan had a very sexy performance of Drake’s “Fake Love,” Russell showed off his vocal skills and sang Bruno Mars’ “Versace on the Floor,” Joao brought the house down with Jason Derulo’s “Talk Dirty,” and Niel gave a showstopping performance of Justin Bieber’s “Sorry.”

Super Girls Ai and Ia dela Cruz served as the event’s hosts while “Pinoy Big Brother” Lucky Season 7 Big Winner Maymay Entrata and the Soul Princess Jona were the two special guests of the concert. Maymay grooved to the newest dance craze, Enrique Gil’s “Mobe,” and Jona belted out her latest album’s carrier single “Ano Nga Ba Tayo.” Jona and BoybandPH also sang their song “Till the End of Time” as the live audience raised their mobile phone with lights in unison.

BoybandPH ended the magical night with “We Made It,” their first ever single after winning “Pinoy Boyband Superstar.”

After their concert, the five members were overjoyed. The concert’s hashtag #OneMusicBoybandPH became a trending topic on social media for several hours and their digital concert was record-breaking in terms of online viewership. Niel shared “Grabe! Sobrang saya! Worth it lahat ‘yung pagod, ‘yung effort.” Joao added “I feel amazing! I am so happy that we’ve done it already. We’ve finally made it, we had our own digital concert, it’s just amazing.”

BoybandPH thanked and assured the super fans that they will continue to give their best in every performance so they can spread unli kilig to more and more people. Niel started by saying “Thank you so much sa unli support n’yo sa amin. Sa uhaw, sa gutom, nagtiis kayo para lang makita at makasama kami.” Russell shared this success with their supporters “Maraming maraming salamat sa inyong lahat. We wouldn’t be able to do this without you.” Tristan also added “Sana huwag kayong magsawa sumuporta sa amin, huwag kayong magsawa mahalin kami. Kayo ang inspirasyon namin.”

Joao also expressed his gratitude to all the super fans “We can’t thank you enough for supporting us. From the beginning, since PBS, to mall shows, to albums, now to our own digital concert, I just want to say thank you so much from the bottom of my heart and we love you all so much.” Ford ended with a promise “Asahan n’yo, hindi pa ito ‘yung huli, kundi ito pa lang ang simula.”