Drew Arellano talks about being dubbed as a ‘millennial parent.’ 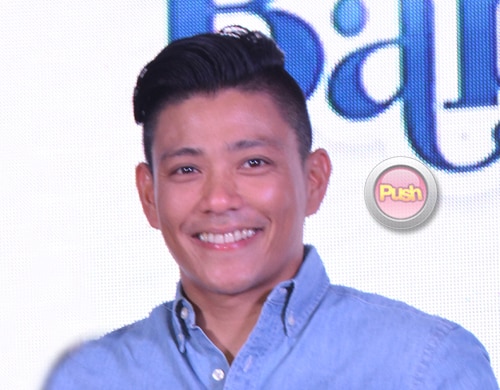 With his son Primo about to turn nine months old soon, Drew Arellano admitted he does not view Father’s day as a special day for him. “I feel that for me naman Father’s day or Mother’s day is every day. So parang it’s just really a formality lang. I feel Father’s day should be Mother’s day. I feel that it’s Iya really who is hands on and everything and I’m just happy to be there. I’m just happy to support so yun lang. In the future siguro if I get to go to the playground and do activities with Primo like motorbike, running or whatever or swimming. I’m just happy that he’s turning one. It’s pretty exciting. He’s eight and a half months now so konti na lang. Everything’s good,” he shares during their launch as the first family ambassador during the BabyFlo Let the Love Flow presscon held last May 19 in Ortigas.

Drew revealed what was the biggest challenge for him as a dad during the first few months. “Siyempre he favors the mom. The first few months ni Primo meron akong frustration and dilemma. Whenever I get back from my travels, when I open the door na, tine-testing ko kung kilala na niya ako. I think alam na niya na I’m the dad pero feeling ko alam niya na I’m just the clown. But you know medyo tumanda na siya. So just by the mere fact na alam na niya, parang malaking bagay na sa akin yun. In the morning, a slap on the face is like ‘I love you Papa!’ for me. Ganun iniisip ko,” he shared.

Early mornings in bed with Iya and baby Primo is Drew’s favorite family bonding moment. “This boy sleeps very early. Probably around 6:30 pm and then we both sleep probably around 9-ish. Of course this guy wakes up every three hours. Pagdating ng 5:30 am I feel it’s like a bonding time for the three of us because we’re half awake but this boy is awake. And so nanggigising siya. He’s going to tap my face, slap my face. That’s why it’s hard for me to do my travel show weekly. When I wake up somewhere and I’m not with these two parang it’s not normal. So I think yun yung pinaka-bonding time namin na early in the morning,” he shared.

Drew said that he gives full credit to Iya for raising their son well. “I have no right to say anything because para sa akin saling pusa lang ako sa parenthood eh (laughs). Everyday is Mother’s day and Valentine’s day. I’m so grateful that Iya has nieces and nephews na she took care of rin. So parang kahit papaano she has experience already. I guess I expected the love to flow naturally from Iya as a mother. Kasi it’s just so natural for her really. She says that she had a hard time. She did but I think it was just a matter of time that she realized na kaya niya naman pala and I never doubted that. As for me naman, most of the time I’m a spectator, I support lang and siyempre it’s different when you’re breastfeeding di ba? So I’m just happy that I’m there and I’m home five days a week,” he said.

The travel show host also admitted he and Iya are already preparing to have baby number two. “Definitely. I think it’s a strategic lang talaga to try again. We might have to try para okay yung momentum namin ni Iya pretty much. Baby girl naman sana kung puwede,” he added.

Dubbed as “millennial parents,” Drew said he and Iya plan to raise Primo as normally as possible. “It’s funny because people don’t know that I’m seven years older than Iya and I’m nearly 40. I think that’s a good thing. The kid makes us feel and look younger as well. As much as possible we will try to regulate his exposure, we will try to make him feel that he’s going to grow up like a normal kid. We will still continue to talk about it and do our best to make it feel that it’s normal. I don’t want him to be sanay with all the attention. Because you know naman what happens to a kid having that amount of attention. Medyo baka magkaroon ng negative effect yan eh paglaki niya. We don’t know yet. Okay naman yata yung pagpapalaki namin. It’s just a happy household eh. Kaya yun yung feeling ko nasasanay siya. Hindi naman niya nakikita yung social media or ang daming likes ng pinost ng nanay or tatay ko. Hindi naman niya nakikita yung commercials niya on TV. So now it’s still cool. Ang sinasanay lang namin sa kanya actually yung exposure sa mga tao and traveling,” he explained.