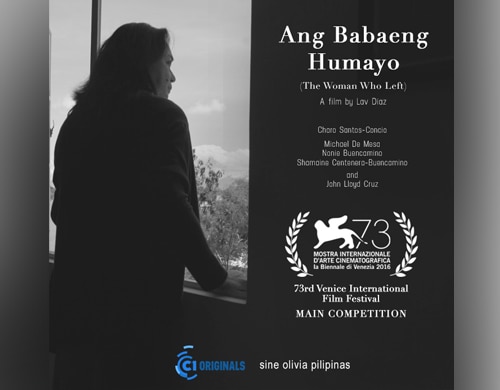 A.O. Scott of The New York Times describes the film as “carefully composed and hauntingly beautiful to behold.”

“Like (Lav) Diaz’s earlier work, it is long and slow-moving, but at nearly four hours it feels less like a test of your endurance than an appeal to your appetite for character, incident and emotion,” Scott noted.  “Mr. Diaz’s view of human affairs is pessimistic. He is fascinated by guilt and innocence but skeptical of the possibility of redemption. Yet his films, this one even more than “Norte,” are the opposite of despairing. The last shots of “The Woman Who Left” are devastating, and the film makes uncompromising demands on your attention and your empathy. But it is also illuminating and, in its downbeat, deliberate way, exhilarating.”

Joshua Brunsting of the film review and news site CriterionCast.com wrote: “The beauty of Diaz’s long, static takes is that they allow the viewer to become truly invested in their plight, and the performers enough space to embed each moment with deep humanity. The story itself may sound like it doesn’t quite fit the lengthy run time, but the viewer becomes startlingly intimate with the film’s lead character, and the battle between wanting to start a new life and yet never quite being able to shake the injustice done upon you previously is a universal struggle.”

One of the year’s best films

He zeroed in the cinematography of the movie, saying that filming the “revenge thriller” in the neo-realist manner is “deeply exciting and makes the film quite the important work”.

“While the run time may be daunting, this moving and engrossing meditation on revenge and forgiveness is one of the year’s best films and an important change in pace for a director whose importance may never be properly judged,” he added.

“Dostoevsky, particularly, gives us a sense of peering closely at troubled souls, down to their dirty cuticles and unwholesome breath. In Diaz’s film, the human figure, captured in long to medium shots, blends with the background. Such framing makes it easier to recall conjunctions of bodies than inpidual faces,” she related.

According to Bittencourt, the “panoramic vision of the Philippines’ socioeconomic woes” is the main strength of Humayo.

“Diaz’s long takes can slip into a pedestrian mode, but there is suppleness to his night photography. The rich chiaroscuros evoke noirish dread, especially in scenes near the end of the film,” she said.

Both columnists praised the exemplary performance of the actors, particularly Charo Santos-Concio’s portrayal of the lead character Horacia Somorostro, which was equaled by the brilliant acting of John Lloyd Cruz, Nonie Buencamino, Shamaine Buencamino, and Michael de Mesa.

Ang Babaeng Humayo tells the story of Horacia, a schoolteacher who got locked up in jail for 30 years after being wrongfully accused of committing murder and her quest for vengeance to the person who framed her up. Throughout her journey, she befriended three disparate characters whom she thinks could help her in her revenge – Mameng (Jean Judith Javier), a mentally-disturbed street dweller; Kuba (Nonie Buencamino), a hunchback balut vendor; and Hollanda (John Lloyd Cruz) an epileptic transgender.

The four-hour movie shot in black and white is loosely inspired by Tolstoy’s infamous short story “God Sees the Truth But Waits” and is the first film of Charo Santos-Concio since the cinematic incarnation of Esperanza in 1999 and after her retirement as ABS-CBN’s president and chief executive officer.

It was also the recipient of the Golden Lion Prize for Best Film in the main competition of the 73rd Venice International Film Festival in 2016.