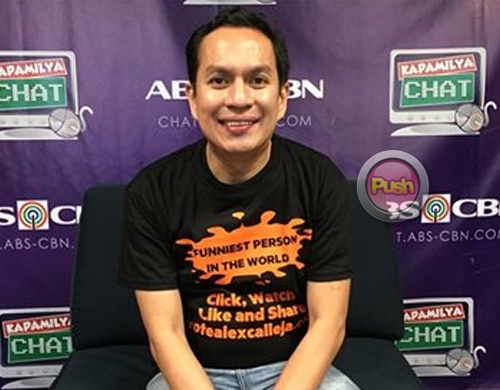 Out of 88 comedians from different parts of the world, stand-up comedian and ABS-CBN comedy show writer Alex Calleja managed to finish first runner-up at Laugh Factory’s “Funniest Person in the World” contest which concluded in Finland last year. Now, Alex has his own stand-up comedy show titled Lakas Tawa which airs on ABS-CBN TV plus channel Cinemo.

Being the writer for It’s Showtime, Goin’ Bulilit, and former sitcoms of the Kapamilya network, not to mention a member of Comedy Manila, how does he manage to never run out of funny things to say?

He also said that he used to be an IT programmer who went to a workshop for stand-up comedians. He was only doing hosting then.

In 2007, he entered a group of comedians where he developed structure to his jokes. “Ang comedy is like set-up, punchline. So nagawa ko ‘yun kaya naging stand-up (comedian) ako.” He was later discovered and landed a job at ABS-CBN where he became a scriptwriter. He said he was writing about his experiences then.

“So ang creative, sulat, sulat then mag-o-open mic,” he said, which he does at Comedy Manila.