Sam Milby singer admits he looks up to his manager like a father. 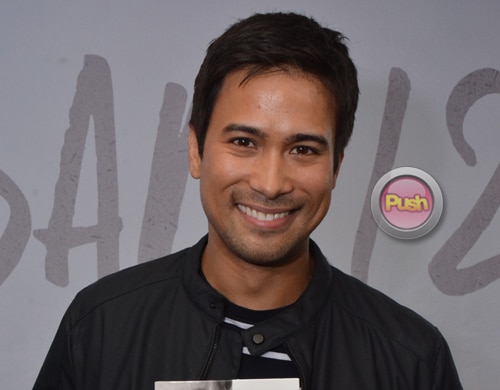 Almost six years since releasing his last album, Sam Milby said he is so proud of his latest album Sam:12 that he still can’t decide which are his favorite songs from the playlist. He is also co-producer of the album. “It has nine tracks all original except for one song which was for a movie The Mistress. It was ‘Chasing Cars.’ Mahirap mamili (ng favorite song). I feel that there’s no throwaway album. This is my strongest album I’ve had. It has old and new sound and there’s a lot of upbeat (songs) but there’s also that rock ballad,” he shared.

The album which also coincides with Sam’s 12th anniversary in showbiz, was something Sam did not want to rush which is why it took years to finish. “Hindi ko alam (laughs). Naging busy. Ang daming nangyari in between. But ako I’m just happy that after six years I’m back with another album that I can say I’m very proud of. I miss music. I have my own home studio na that I’ve been investing (in) and buying equipment. I’m enjoying that and I would like to actually learn. I would love to do classes for music production,” he explained.

Even though he hasn’t been as visible as before, Sam said it does not mean he is slowing down in showbiz. “I don’t feel na nag-slow down. Kasi over a year-and-a-half yung Doble Kara and ngayon it’s about the album and bukas may meeting ako for a new movie. It was also my decision. Ayoko ng sabay sabay lahat. Kasi ngayon when I do something gusto ko ibigay yung buong puso ko. This album was supposed to be released last year na sabay ng Doble Kara and it was my decision na ayoko na muna i-release kasi mahihirapan ako mag-promote and I don’t feel na yung buong puso ko would be sa promotion ng album,” he said.

Last March, Sam’s longtime manager Erickson Raymundo filed more than 50 counts of libel and other charges against veteran entertainment writer Jobert Sucaldito who also worked with Sam. The singer-actor said he has not had the chance to talk to Jobert since the filing of the case. “I heard (masama ang loob niya). But even before the case happened we were okay. I saw him sa ABS-CBN and I supported yung concert na ginawa niya. I do appreciate everything he’s done. I don’t want to take that away. He’s done a lot for me over the years. He was my publicist for free paglabas ng PBB house. I won’t take that away from him but understand that Erickson is my dad and he’s my manager. Everything started with him. Yun lang,” he shared.

Sam said that he fully stands by his Cornerstone manager with regards to the issue. “When it comes to the case, ayoko na pag-usapan kasi first off I’m not a part of the case. He helped me a lot and I appreciate everything he’s done for me. But also at the same time Erickson is like my dad. Everything started with Erickson and I hope that people can understand that also. That Erickson is my manager, he’s my dad and I will stand by him also,” he said.