Local YouTubers Kristel Fulgar and Ranz Kyle, who just reached the one-million-subscriber milestone, showed their brilliance as performers onstage with numbers that made them viral sensations. 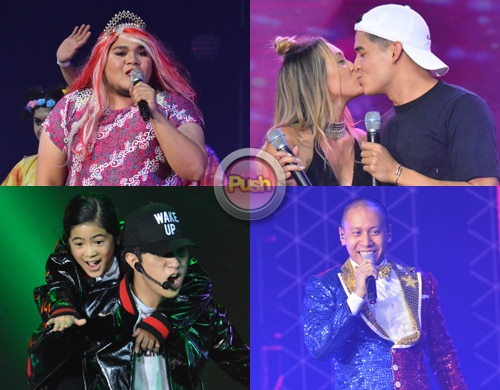 YouTube’s brightest stars shone like no other once more in yet another fun and rollicking YouTube FanFest.

These top YouTubers of the world again drew their respective fandoms all shrieking and screaming with even just a mere mention of their names.

Attendance skyrocketed to a record 7,000 this year, with organizers stating tickets were sold out in six minutes. It rose from 4,500 last year.

Their Manila fans trooped to the World Trade Center in Pasay City on Friday, May 12 to finally see them in the flesh and watch them perform in this spectacular event—a Philippine leg of a worldwide series of YouTube FanFests engaging the platform’s content creators with their massive following around the globe.

Local YouTubers Kristel Fulgar and Ranz Kyle, who just reached the one-million-subscriber milestone, showed their brilliance as performers onstage with numbers that made them viral sensations. Kristel’s rendition of Yeng Constantino’s “Salamat” and Kyle’s awesome dance moves with sister Niana Guerrero to the tune of their single “New Jam” proved why they have emerged among the best on YouTube.

Another phenomenal YouTuber, Janina Vela, also wowed everyone with her incredible presence, not as a makeup, fashion influencer, but now as a singer, belting another huge Yeng Constantino hit “Hawak Kamay” to the delight of the crowd.

Other huge YouTube stars took the stage and caused a wild frenzy.

Lily Singh, who is a first-time Manila visitor, bannered the event with her tantalizing 11 million follower-strong Superwoman persona onstage, as she rapped and danced her way with her “boy” Humble the Poet.

Heartthrob Alex Wassabi, one of the biggest Filipino-American content creators on YouTube, again brought the house down with his humorous game play, this time with his girlfriend and fellow YouTube star and lifestyle vlogger Lauren Riihimaki, also known as LauraDIY.

Wil Dasovich, a Philippines-based American travel vlogger, also captured hearts with his charm and wit in his appearance with his Vlog Squad—Coraleen Waddell and Daniel Marsh.

Dancers Jayden Rodrigues and Matt Steffanina presented their awesome skills on the floor with their patented moves they popularized online.

Korean violinist Jun Sung Ahn or JuNCurryAhn, meanwhile, captivated the audience with his scintillating number, serenading the crowd with a strings version of “Crush” from the blockbuster Korean fantasy drama Goblin.

But what really mesmerized the audience was the appearance of the phenomenal Iloilo-born blind singer Alienette Coldfire, who recently made waves in France’s Got Talent. Her classical, operatic singing truly opened everyone’s hearts to her incredible artistry.

The show was hosted by top YouTuber and funnyman Mikey Bustos.