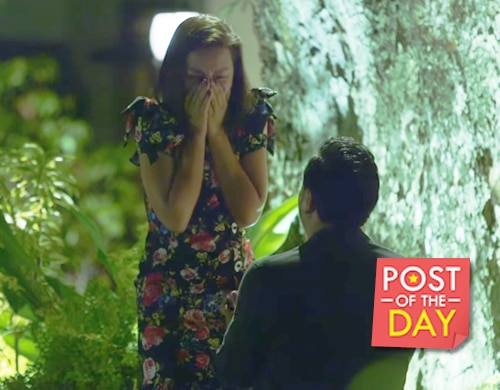 Acclaimed wedding videographer Jason Magbanua shared the story of how Norman Crisologo proposed to Beauty Gonzalez through a video on his blog.

According to the post, Norman told Beauty that if she sees a drone, that means he would propose. Beauty saw a drone when they were on a trip to South America and also in Hong Kong but the proposal did not happen. Hence, she did not want to expect too much anymore.

Norman did the proposal in Ilocos Norte because that is where Beauty wanted to get married. He also asked Ely Buendia to be present and sing “Magasin” for the song “was a recurring theme” in their love story. According to Jason, “he was smitten by Beauty’s cover appearance in FHM, and did everything in his power to get an introduction.”

Unfortunately, Ely did not make it and so Rico Blanco and Erwin Romulo taught a choir to sing “Magasin.”

“Honestly, that was surreal for me – Mr. RiverMaya teaching an Eraserheads song. Strange days,” Jason wrote.

Proposing, Norman told a tearful Beauty, “It’s been so long we’ve been through so many things I can’t imagine it’s taken me 50 years to find you and I found you and I’ll never ever gonna lose you, I’m never gonna let you go. Will you make me the happiest man in the world and will you marry me?” Watch how Beauty said “yes” to Norman HERE: Beauty and Norman: The Surprise Wedding Proposal

The two got married in Tagaytay last May 6.