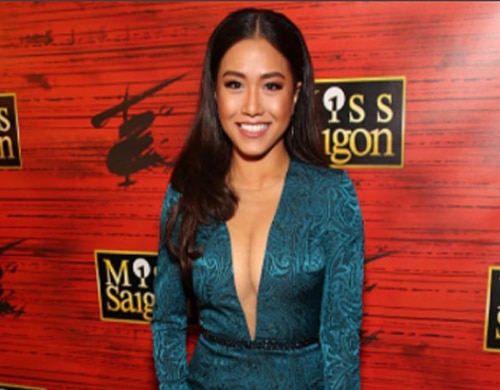 "The first time I saw it, I think it was in 2010, it was playing in Toronto, Canada and my uncle, who was really obsessed with musical theater, was like 'Why don't we go see Miss Saigon?' and I was like, 'I have no idea what that is.' [laughing] All I knew was that Lea Salonga had done it originally. But then after watching it I said, 'One day I am going to do this show!' and now here I am. It's just crazy. But yes, it is a very powerful story."

"You know her voice is just perfect. Every time you hear her sing it's just always on point. As a singer I am a perfectionist, and every time I hear her it sounds like it's recorded, it sounds like it's not live, but of course it is. And I always want to be like that, but every time I sing, it's not always perfect like that! Listening to her sing, it's like a dream. And of course I was also inspired by all the things that she has done in theater and all the Disney songs that she's done, and she is really big in the Philippines. In fact, when I was young I was part of this Sunday musical variety show and she was one of our guests and I had to sing the song 'Reflections' from Mulan. I was so nervous because she was sitting there listening and watching. And I remember I wasn't even hitting the right notes because I was so nervous, I was just so star struck and it was really embarrassing. But I was young back then, maybe it was 10 years ago, and after that performance I said, 'One day I'm going to sing with Lea and do better', and I got to sing with her a few years later, so it was really a dream."

"Well first and foremost, before I even auditioned for the musical Miss Saigon, I was really scared to try out for it, and she messaged me saying, 'You have to audition for it,' and I was like, 'Well I don't know we'll see.' And she said, 'No, you have to try this!' So I did, I just listened to what she said. And when I got the role of Gigi I was so scared because in my family we're really conservative and I heard that Gigi had to wear a bikini, so I went to speak with Lea about it and she told me, 'People are not going to remember what you are wearing, it's your performance that will matter.' And I knew she was right. It's not about singing, it's about storytelling, and she reminds me of that all the time, just tell the story. And I think it's in my system to try to be technical and just focus on being perfect when it comes to singing, but Lea always reminds me, 'No, it's about the story that matters.' And even now, as I perform on Broadway she still reminds me of that."

"Oh, I was floating! I don't even remember what I did! That night was just surreal. First and foremost, I didn't even expect that I was going to be part of Broadway. It was always part of my dream, my movie in my mind, it was part of my wish list. So when it happened, I was just like, 'Ooh, I'm living the dream!' And that first night was just crazy. My loved ones, my relatives came over and a few of my friends were there, so it was extra special. And of course, everyone in the audience was so excited that finally Miss Saigon came back to the same theater, so it was all really crazy. And of course, the after party was wonderful as well. So yes, I just enjoyed it so much. And now I'm just trying to enjoy every single night and every single moment!"