In only her third TV drama, Legend of the Blue Sea, Ji-Hyun tackled her most physically demanding role. 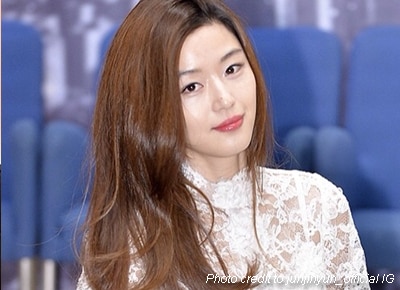 She rose to stardom in the sleeper worldwide hit Korean romantic-comedy blockbuster My Sassy Girl in 2001 as the slightly deranged Girl in the life of the gullible college student Gyeon-woo (Cha Tae-hyun).

People adored her as the haughty, puffed up celebrity Cheon Song-yi smitten by a suave time-traveling alien Do Min-joon (Kim Soo-hyun) in My Love from the Star in 2013.

Now, she’s a loveable, clueless mermaid Sheena from Korea’s medieval Joseon era who drifts in time to find her lost love Dam-ryeong reincarnated in the person of a con-artist Andrei (Lee Min-ho) in the hit Korean fantasy drama Legend of the Blue Sea.

Jun Ji-Hyun is by all means one of Korea’s biggest international female stars even if she had appeared relatively lesser in films and TV dramas than other big name actresses (although she is among a few Korean actors who appeared in a number of Hollywood films).  But in all of her occasional appearances, Ji-Hyun always commands a huge following.

In only her third TV drama, Legend of the Blue Sea, Ji-Hyun tackled her most physically demanding role—that of being a mermaid. While it is fulfilling, Ji-Hyun reveals it is something she jokingly does not relish.

“I don’t want to be a mermaid ever again. Every day, I think about how I never want to play a character that requires water, fire, or special vocational training,” Ji-Hyun said in jest as reported by Korean wave news site Soompi.

Seriously, though, Ji-Hyun revealed she actually “gained a lot of courage from that”.

As mermaids aren’t widely depicted in Korean films and TV dramas, she sees her role as refreshing and exciting.

“Rather than (being) worried, I was (actually) really happy when I first heard that I would be playing a mermaid. I think this role is not something that you frequently find in films or dramas. I'm very eager to show many different things [by portraying the character]," Ji-Hyun was quoted as saying in a Jakarta Post article.

She further explains how different her role is from her previous portrayals.

"Everything is new to the mermaid. There are situations that happen when the mermaid encounters new things, and viewers will be able to feel a different kind of enjoyment and see a different role when they see how the mermaid accepts these things.”

Catch Legend of the Blue Sea daily on Kapamilya Gold after The Better Half.