EXCLUSIVE: Jinri Park on life after PBB: ‘I learned a lot in Kuya’s house’

Jinri Park wins another Brazilian Jujitsu competition and launches her own mobile app. 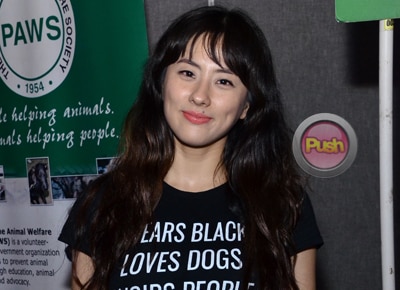 After being one of the Pinoy Big Brother housemates last year, Jinri Park admitted she will never forget her stint inside the house. “A lot has changed after PBB but I see it as one of the biggest blessings that happened last year for me. I met a lot of friends like Elisse (Joson) and of course she came to my event. And not just about friendship but also for my career it helped me a lot. I learned a lot in Kuya’s house kasi Kuya’s words and what he tells me helped me find my way through life. He really helped me realize a lot of things and taught me a lot of lessons in life,” she shared during the launch of her Happy Wag Tales mobile app last May 7 in Pasay city.

During the launch, Jinri got emotional on stage as she admits she got inspired to do the app because of her own pet. “My dog Lassie had passed away it was late last year. She was Shetland sheepdog and she had some problems with her digestive system. So she passed away and that made me want to build this app faster and speed up the process kasi we were already in the process of building the app during that time. That made me change a lot of the views I had. It made me think more about the dog’s happiness rather than it being just a business to make money,” she admitted.

The sexy model-actress explained that her app hopes to bring together dog lovers all over the country. “The app is a one stop mobile app for everything and anything that a dog owner needs. So it helps you locate the nearest vet, the nearest shop, you can even adopt a dog through our app. You can also post on our lost and found if your dog gets lost so that other people can help you look for the dog. We’re also planning to put up a shop so everything that you need as a dog owner you can also buy it in our app. I personally believe that dogs also need friends. They need to socialize. It’s hard to find other dogs to be friends with and maybe the dog owner wants a specific breed or they want to know more about the owner as well so through our app they can find the perfect friend for their dog,” she explained.

The day before launching her app, Jinri proudly shared she also finished top place in her most recent Brazilian Jujitsu competition after getting into the sport just one and a half years ago. She trains four times a week and sometimes even twice a day if her schedule permits. “I’ve been very busy for the past few weeks trying to balance jujitsu, this app launch and some other projects that I’ve been doing. It was really hell (laughs). But I made time to train even if I had to wake up very early and I didn’t sleep for a couple of days. I sleep like maybe three to four hours but I made sure that I was focused on what I wanted to achieve. I got the result that I wanted. I’m very happy about that. It turned out well,” she said.