PAWS vows to pursue remedies to reverse the action. 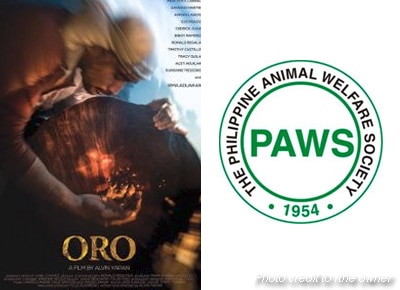 The Pasig City prosecution office has junked the complaint filed by the Philippine Animal Welfare Society (PAWS) against the director and producer of the independent film Oro.

Pasig City assistant prosecutor John Ong was responsible for the ruling to dismiss the complaint against Oro director Alvin Yapan and producer Mark Shandii Bacolod for supposedly violating the Republic Act 8485 (Animal Welfare Act) when they filmed the butchering of a dog for their film.

The film was shown during the 2016 Metro Manila Film Festival. The complaint even prompted Yapan and Bacolod’s suspension from participating in the MMFF for a year due to the said scene.

Film Development Council of the Philippines chairperson Liza Diño previously explained that the suspension was based on Oro team’s lie that “no animals were harmed during the filming of the scene.”

PAWS took to their Facebook account on Friday, April 7, to respond to the dismissal of the complaint after receiving a copy of the resolution.

"While this news initially was disappointing to our team of volunteers seeking justice for the dogs who were killed in the making of the 'Oro' movie, this development has strengthened PAWS' resolve to pursue all other available legal actions against the filmmakers," it read.

Convinced that there is a probable cause to hold the inpiduals responsible for their actions, PAWS vowed to continue to "pursue its legal remedies to reverse the resolution."