EXCLUSIVE: Daniel Matsunaga to represent the Philippines in street soccer

Daniel Matsunaga and his team will fly to Brazil to compete against 50 countries. 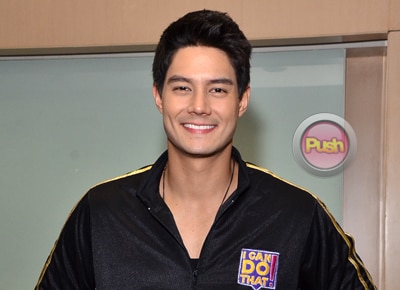 Before the start of his new show I Can Do That, Daniel Matsunaga was so happy to get the chance to compete in his favorite sport. The 28-year-old actor-athlete competed as part of Team Naxional in last month’s Neymar Jr.’s 5 local qualifiers which is a street soccer (futsal) competition. “I won a tournament and I’m going to represent the Philippines in futsal. We’re not sure about the dates yet but very soon I’m going to Brazil with my team to represent the Philippines,” he shared during the ABS-CBN trade launch held last March 30 in Pasay city.

Daniel said it was a tough road to the finals because they had to compete against professional players and former national players in the fast paced 5 on 5 competition. “It was really tough because there were more than 23 teams. I’m not sure about the exact number but it was around that much and we won. From all of them, there were a lot of professional football players there from the UFL league, there were my teammates before in other teams, and we won against all of them so I’m very, very proud. I’m going to do my best to try and represent the Philippines well but I know it’s going to be very, very tough,” he admitted.

The Neymar Jr.’s 5 World Finals will be held later this year in Brazil which is also Daniel’s birth country. But this time he will be returning as a part of the Philippine team. “This is a worldwide competition. It’s not just a small tournament or a national tournament, it’s worldwide and we are going to Brazil to represent the Philippines there. I don’t know if this is the first time this is happening but I hope the Filipinos can support me and my team,” he said.

With a couple of months left to prepare, Daniel said he is also busy training for different weekly challenges in I Can Do That. “Maraming, maraming surprises. They will super enjoy. I can’t say what I’m going to do sa mga susunod na episode pero grabe, it’s really grabe. It’s something that I’ve never done in my life. All the next episodes they will see, every episode is something I have never done in my entire life. So there’s a lot of first times,” he added.