EXCLUSIVE: Christian Bautista admits that he wants to try vlogging

Christian Bautista talks about what projects he wants to do online. 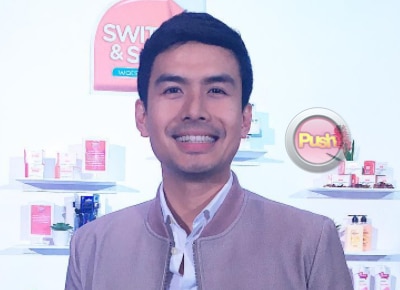 2017 is proving to be a good year for Christian Bautista as he takes on new challenges in his career and an upcoming new soap. During the Holy Week break, the balladeer shared his thoughts. “I reflected on what’s my next direction and what does God want me to do with my life. Most of the time yun lang talaga naman ang lagi kong rini-reflect. Meron din naman mga times na ganun na sometimes I wanted to quit or sometimes I wanted to stop pero keep on walking. Just keep on walking. I believe you don’t have to wait for Holy Week to change something. If you have to change something do it now,” he shared during his Backwater body spray presscon held last April 4.

The 35-year-old singer also admitted he has started becoming interested in doing videos for YouTube. “I have christianbautistaonline.com and a YouTube channel. Wala pa akong na-po-post honestly so pasimula pa lang tayo. Parang YouTube covers na ako lang mag-shu-shoot. Kaya mo na eh, you just need to buy the right camera and the right lighting. Walang problema. Siguro papunta siya sa personal YouTube cover videos as of the moment and then a little bit of me talking about that or kung na-inspire ba kayo sa song na yun. It’s still going to be more about music,” he said.

While preparing for a new album and single that is set to come out in the next few months, Christian admitted that he is semi-curious to try vlogging well. “Hindi nag-aaral lang ako ng mga camera set ups, different lighting set ups. Amateur lang ako, amateur lang (laughs). I don’t know, I’ve met a lot of vloggers and kapag nakita ko yung gawa nila parang okay pero mahirap pala. It takes a long time to do. Hindi ko inaamin na magiging proper vlogger ako. I guess nasabi ko lang yun kasi it’s a interest that I might try. So let’s see if it works out or not. Pero hindi pala siya madali kung ikaw lang lahat gagawa. Huwag natin masyado seryosohin ito ha kasi alam ko medyo bago ito pero baka mag-expect yung mga tao. I just found vloggers very, very interesting and it’s hard pala what they do.  Sometimes you have to travel at your own expense and take the time to shoot, edit, do the audio for content. It’s very hard and na-appreciate ko yun. I tried it and let’s see where it goes,” he explained.

As one of the vice presidents for special projects of the Organisasyon ng Pilipinong Mang-aawit (OPM), Christian hopes to be part of making changes that can benefit his fellow local artists. “Right now nasa planning kami for the year eh. So the last year has passed. Kuya Ogie Alcasid has called for a new session so malalaman ko pa lang in the next few weeks. We’re having our elections soon so things could change so tingnan natin kung sino yung next batch (of officers) or if ako pa rin. So if the people vote for me then of course I’d love to stay,” he added.