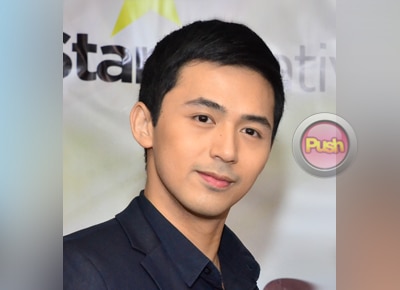 Moving to another network was a leap of faith for Enzo Pineda. His eagerness to evolve as an actor pushed him to take his career into new territory despite the uncertainty.

“As an artist, I felt that it was necessary for me to take that challenge in order for me to grow into a better actor so I made it a point to always give my all in every audition as if it was my last. I'm just very lucky that ABS-CBN saw something in me and gave me these opportunities,” he said in an interview with Push.com.ph.

He confessed that he is still overwhelmed by the fact that he is now part of the network. “It feels surreal. I'm grateful to be here and to be given the opportunity to do what I love, which is acting. I want to thank ABS-CBN for the trust they’re giving me despite being a newcomer,” he said;

Enzo is set to star with Diego Loyzaga and Sofia Andres in the upcoming ABS-CBN series Pusong Ligaw. The actor is already looking forward to working with the two stars. “I'll be having a lot of intense scenes with Diego and emotional and kilig scenes Sofia. I'm very excited for that and more,” he stated.

The new Kapamilya star will be playing the role of Rafa, the third wheel for the two main characters in the soap. He stressed that he doesn’t mind playing the role. “I'm comfortable playing any role. What matters most for me is the depth, substance of the character. The more interesting the character, the more excited I get portraying it,” he remarked.

He shared that his character will face two major dilemmas in the soap. “My character will be struggling with two things. Will he be a dutiful and responsible son to his adoptive parents or will he follow his passions is life and fight for the things he loves?”

With a competitive industry like show business, Enzo remarked that passion, hard work, and perseverance have fueled him to be the actor that he is today. “If you have a dream and you envision yourself being that person, hold on to it. Because one day it will come true no matter how far you are from that goal. Just be consistent, be humble, and put in the work everyday and everything else will follow,” he stated.