What to expect from McLisse in their upcoming teleserye 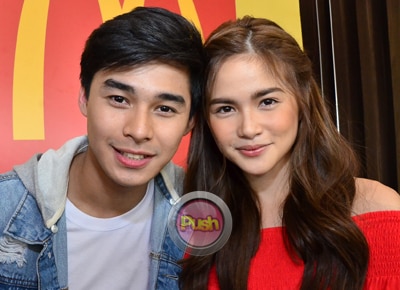 Kapamilya love team McCoy de Leon and Elisse Joson felt overwhelmed by the love they received from the fans who participated in their McDonald’s meet and greet and Facebook live session on Friday, March 31 at the fast food chain’s branch at Eton Centris.

Elisse rose to fame for a McDonald’s commercial where her character was moving on from heartbreak. Recently, the fast food chain released a continuation where Elisse was no longer heartbroken as a new guy, played by McCoy, comes along.

McCoy and Elisse’s fandom grew after fans saw their chemistry on the reality show Pinoy Big Brother Lucky Season 7. Even before the season concluded, they had already become a love team.

For McCoy, he feels humbled to be receiving such blessings. “Kaya dapat mas stay on the ground pa rin po kami and do our best in our work. And ‘yun, gano’n pa rin, i-center pa rin si God.”

Currently, the two are working on a new teleserye, Kung Kailangan Mo Ako. While they did not disclose what exactly their roles are about, McCoy said that people will see a different McLisse. Elisse said, “Malayo po ito sa totoong Elisse and McCoy behind the camera so this would be something different for us po.”

When asked about the possibility of having a kissing scene, Elisse laughed and replied, “Hindi po natin masabi.”