Aside from ElNella, McLisse, NLex and Joshua are also part of their soap 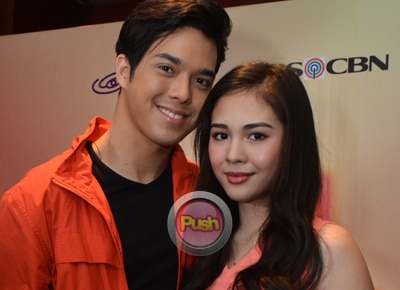 Elmo Magalona and Janella Salvador, also known as ElNella, are set to make a TV comeback less than a year since their first soap ended.

The three love teams, during the show’s announcement on Wednesday, are to be joined by promising young actor Joshua Garcia and seasoned stars Eula Valdez, Mylene Dizon, and John Estrada.

Doble Kara director Manny Palo and Direk Rahyan Carlos are teaming up to create the show.

Janella added that she is also excited since their new project is going to be different.

What is the soap going to be about?

The tandem revealed that the soap is set to lean on the drama side which is the complete opposite of their musical-themed show Born For You last year.

With a new soap and two movies coming this 2017, the two are very happy and grateful that they have been given the chance to showcase their talents again.

“Siyempre may konting pressure kasi siyempre kailangang mas ano ngayon. Pero more than the pressure, excited kami to work with each other again and to work with something different from before,” said Janella.