The young singer said it’s not his problem if the bashers weren’t raised that way. 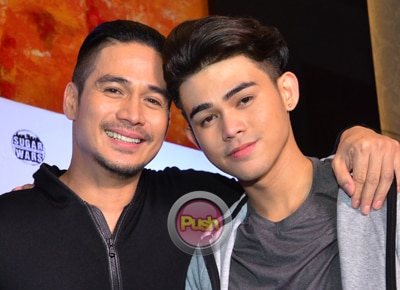 A video of Piolo Pascual kissing his son Iñigo Pascual made rounds online and got mixed reactions. Some bashers found the act malicious while some lauded the two for being affectionate towards each other.

Iñigo broke his silence about the controversy and just laughed it off.

"To be honest it's something that ngayon, parang I just laugh about it. Kasi parang what's the point of making a story out of something that shouldn't," he told the hosts of the morning show Magandang Buhay.

Piolo, who was also a guest on the show echoed Iñigo’s sentiment and said it’s not a big deal.

"You know what, ang hirap. You want to get mad at these people, gusto mong mapikon sa kanila. But if you know what is right, what is positive and what is right in the eyes of God, 'di ka mag-iisip ng malisya kung nasa tamang pag-iisip ka. Anak ko ito! How dare you tell me what I should do and I shouldn't do,” he said.

"Ayaw ko kasing mag-isip ng masama sa tao, pero 'yung mga namba-bash siguro naiinggit sila because they don't get to experience that kind of bond with their parent, or their son. Ayaw ko na lang magsalita, because my relationship with my son is a blessing and I'm going to flaunt whatever we can just as long as we have the time together, hindi ba?" he added.