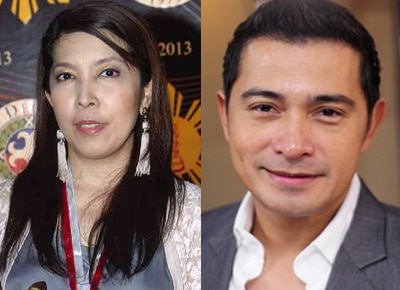 Dolly Anne claimed on her March 18 PhilStar column that Cesar was a mere victim of nepotism.

It may be recalled that an anonymous TPB employee filed a complaint against Cesar, which included “mismanaging the department’s funds and possible corruption.”

Cesar has previously denied the allegations against him and even called them “baseless” and “untrue.”

But, in a new twist to the controversy, Dolly Anne shared on her column that the action star “discovered discrepancies in TPB” which could probably be the reason why complaints were filed against him.

“They (employees) found out that I already knew about their anomalies. So out of desperation, they are attacking me and making up stories,” quoted Dolly Anne.

Among the anomalies that Cesar supposedly found out, according to Dolly Anne, were a deal with MTV Fusion, questionable contracts, lack of participation in the World Peace Conference and “One Korea” concert at SMX and the Boracay sewerage issue.

The columnist shared that Cesar has already sent a letter of rebuttal to the complaints against him to the Office of the President, which serves as his rebuttal.

It may be recalled that President Rodrigo has expressed “trust” towards Cesar regardless of the controversy.

Aside from revealing his discoveries, Cesar, through Dolly Anne’s column, also addressed the other issues raised against him, which includes hiring his own brother Rommel to be part of TPB. There’s also his “personal trips,” his supposed “incompetence” as the department’s head and his supposed performance in a concert mounted by his niece.

Dolly Anne noted that the TPB won’t shoulder any expense in Rommel’s “SelPhilippines” mobile app, which would supposedly promote tourism in the country.

She also claims that Cesar has the “necessary documents” to refute the accusations about his “personal trips.” Furthermore, he stressed that he performed gratis et amore at his niece’s concert. Finally, Cesar also pointed out that he never acted like a “know it all” inside their department.