LOOK: Steve Harvey has a message to Warren Beatty amid Oscars 2016 boo-boo 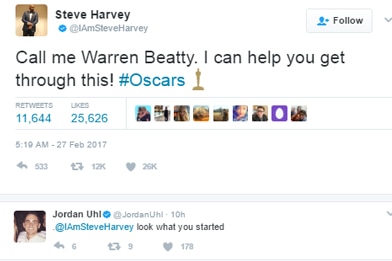 Steve took to his Twitter account to react on the viral incident involving Warren and Faye Dunnaway.

Warren and Faye Dunnaway mistakenly announced the hit film La La Land as the Oscars 2016 Best Picture when it should've been the indie flick Moonlight.

Many were quick to liken the incident to Steve's own "moment" in the Miss Universe 2015 coronation night when he also, mistakenly announced Miss Colombia Ariadna Gutierrez as the winner when it should've been Philippine bet Pia Wurtzbach. Unlike Warren though, it was Steve who immediately corrected his blunder.