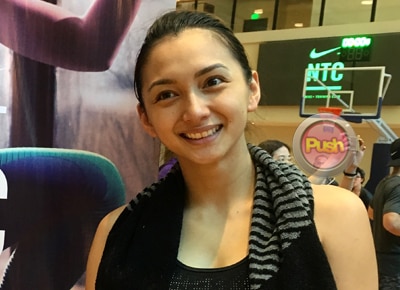 After giving birth last August, Iya Villania admitted that her life went through a big change. “Well being a mom just changed everything. Priorities, of course time, it’s really all about Primo now. But I have to say the hardest part that I had to go through was the first two months. But now that his feeding intervals are longer, I have more time to do things and scheduling isn’t as hard as it used to be. Yung sinsasabi nila na kapag gusto you’ll make a way, kapag ayaw ang dami mong dahilan. So if there’s something I want to do I still find a way to get it done,” she shared during the Nike Training Club event held last February 23 at Kerry Sports Manila in Taguig city.

As doting parents to six-month-old baby Antonio Primo, Iya said her husband Drew Arellano was there to support her every step of the way even when she experienced some form of post-partum depression. “Maybe very light, only because I was trying to do everything in the early days, in the very beginning napagod ako, napuyat ako so I was losing patience. I was getting emotional. For the first two weeks ganun ako. Of course Drew gave me a lot of hugs, a lot of kisses. He would take the baby when I would get stressed. He would take the baby when I want to squeeze in a workout. And then eventually people would just remind me, my mom friends would tell me, ‘Iya isipin mo na lang two months lang siya magiging newborn. After that ma-mi-miss mo yung mga times na hindi pa siya gumagalaw.’ And so yun I just had to remember that and keep in mind na every day would be a day closer to getting longer sleep. So yun na lang inisip ko,” she recalled.

Iya clarified that despite Drew’s seemingly busy schedule (as a host of a long-running travel show) he spends a lot of quality time with their growing family. “Akala niyo lang busy si Drew pero actually he has a lot of time din at home. I think because of his travel show baka people are under the impression that he’s always out of the house. No yung mga travels niya overnight lang, the most (he would be gone) would be a week if out of the country. Pero kapag out of town one night lang eh or two nights is the most but rarely does that happen. Every other night he’s at home lang so it’s really not so bad. I don’t know how to explain it. it’s just fun at home. Siya yung makulit na dad na ayaw niyang na-se-stress si Primo. Lalo na nung early days na kapag pagod ako tapos hindi ko na kayang ipatahan si Primo, si Drew talaga yung nagsasayaw so may mga ganun siya. So he’s a nakakaaliw and very entertaining dad. That’s the kind of dad he is,” she explained.

As a first time mom, Iya said she has been lucky to be able to juggle work and still be breastfeeding. “I haven’t had to cut down because with the work that I’ve been given I’ve been very blessed and lucky to have because it hasn’t been taking too much time away from me and my baby. The work I have is 24 Oras and five to eight (pm) lang yan with traffic na yun. I do direct breastfeeding as much as possible. I really don’t know how it’s helping me lose weight. People say that you burn around 500 calories when you breastfeed but for me I don’t count those calories as long as if my heart isn’t being pumped. Feeling ko kung hindi high yung heart rate ko, parang feeling ko hindi siya nag-ka-count. At saka breastfeeding kasi makes me hungry eh. So nag-bu-burn ako ng calories pero todo rin naman yung kain ko,” she said.

During the Nike Training Club event, Iya also shared the story behind her baby’s unique name. The 30-year-old news reporter said they chose Primo mainly because her husband and his family are huge Transformers fans. “Yung totoo? Dahil kay Optimus Prime (laughs). So it used to be a joke. I’d tell him, ‘Really babe you are not calling our son Primo!’ Lalo na nung nalaman namin na lalake. Ang nakakatawa we had a list of names for girls. Sa lalake wala kaming ibang pangalan na maisip kundi yung Antonio Primo. So Primo siya ng Primo hanggang sa nag-research na ako and then I discovered that Primo actually means firstborn or panganay in Italian. So sabi ko sige na nga nakalusot so we decided to keep it. Antonio naman is my father-in-law’s name,” she said.

Currently on a low carb diet, Iya said she can’t wait to get back to her pre-pregnancy weight. She also hopes to inspire other moms to not lose focus on maintaining a healthy and fit lifestyle. “My advice for moms is that it’s never too late and you will feel good about yourself. So get fit and get happy. Me and Drew we work out together when we can. We get on the bike together, we do training rides together. But more so at home because it’s kind of hard to bike outside because of the pollution, the traffic, the cars so I just bike at home na lang,” she added.