Denise Laurel opens up about breakup with ex-fiancé Sol Mercado

Denise Laurel reveals that it was ex-fiancé Sol Mercado’s decision to break up. 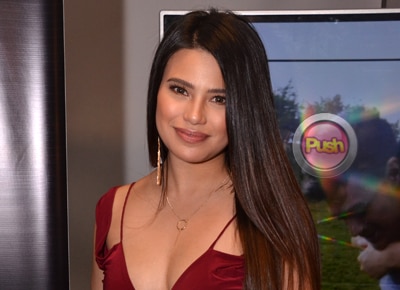 During the series’ media launch, Denise, when asked about finding her ‘better half,’ said that she is currently overwhelmed with work and immersed in her role in the series so she does not really focus on her personal life as of the moment. She broke up with her ex-fiancé, basketball player Sol Mercado, last year.

Saying that her character has many layers, Denise said, “As an actress, I can’t really focus on my personal life right now. And actually, ayoko rin ma-focus sa personal life ko right now so I’m really drowning myself in this and trying to break ‘yung manhid na nararamdaman ko kasi ‘pag actress tayo, kailangan you have to have your emotions with you.

“If I would ever have a better half again, I don’t know. Tignan natin kung anong gusto ng Diyos. Dati, masaya rin ako kasi buo ako and then I became a better half and now I’m trying to figure out how to become whole again,” she added.

Later while talking to some reporters after the event, Denise referred to this project as her most difficult one because, “This is the first time na hindi ko mahiwalay ang personal at ang (work).” Nonetheless, the actress said that she has many things to be thankful for – one of them is her son Alejandro. “We’re very open. Pinag-uusapan namin lahat. I’m very honest with him, he’s very intelligent. He knows everything that’s going on,” she said, adding that Alejandro, who is close to her ex-fiancé, thinks maturely.

Opening up about her relationship with Sol, she said, “We were together for a long time. It was just towards the end there na medyo naging rocky kasi we do deeply care for each other and we did really see a whole life together so it’s a big life change… Buong buo kasi ako when I met him. I had my life completely in control and he also so we got used to being with each other. Normal naman ‘yun sa mga relasyon so now, at least we reached the point where we can be peaceful with each other.”

While she did not disclose the reason for their break up, Denise, who is just thankful that they are now okay, said, “It’s not ‘sawaan.’ It’s just that he made this decision so… Yeah (he initiated the break up) but like I said, it was a series towards the end there, on and off but then the final word was really from him but we are friends and everything is peaceful. In fact, he hung out with my son last night.”

When asked if there is a chance for them to reconcile the relationship, Denise answered, “Nako, I don’t know. Manhid na manhid ako. I’m so focused on this project and really trying to be the actress that I used to be.”