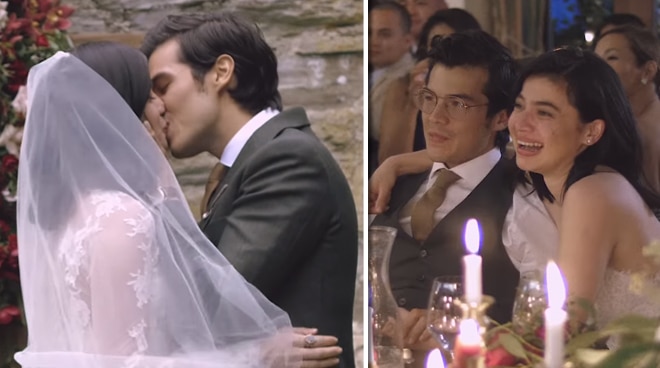 Jason Magbanua recently released a clip of the highlights of Anne Curtis and Erwan Heussaff’s wedding in Queenstown, New Zealand. The 20-minute clip showed the beautiful wedding venue, their vows, pre-wedding party where Nico Bolzico had a short speech, and their loved ones’ speeches.

“This one is about people who no one could’ve ever imagined together. We couldn’t have been more different when we first met and probably didn’t strike anyone as a likely match. We tested and strained our relationship bringing it to great heights with deep faults right ahead but eventually managed to be here today as a team,” Erwan said during the wedding.

“It’s always been very difficult for me to express my emotions I don’t really know where it comes from it’s just not in my nature and I know that this can be very frustrating for you that’s why I’ve always enjoyed writing, it helps give a voice of my feelings. Finally enough since the day I’ve met you I’ve written more each day. From flirty text messages to unreadable late night advances to love letters, some sent, some never to see the light of day. Without noticing it, you’ve made me want to tell a story and compile it and fear that one day I would have to read it back just to remember us knowing that whatever happened,” he added.

The clip also showed Anne and Erwan’s friends gathering together at the pre-wedding party where Nico said, “Okay Erwan, you’re smart, good looking, you can cook, you’re self-driven, you’re successful, you push me to workout, you take care of me. Sometimes I feel I married the wrong Heussaff,” earning the laughter of the guests including his wife Solenn Heussaff.

One of Anne’s friends shared that it seemed that Anne had never been that happy until she met Erwan. “That was probably because of you (Erwan). We all prayed for you.”

“It’s been quite a rollercoaster, we’ve had our ups and downs, our twisties and twirlies, but we never let go. You taught and made me believe in magic again. You took what was broken and all of its craziness and made it whole again,” an emotional Anne said during their wedding.

Anne’s “man of honor” and best friend Luis Manzano said during the reception that he’s seen Anne during the “lowest of lows and the highest of highs.”

“I love celebrating every moment of that with you but being a very protective best friend, when Erwan came into your life I’m very, very thankful that I can sleep better knowing you’ll be taken care of the way Erwan takes care of you,” he said.

Most of them pointed out how different their personalities are but it was a perfect combination and they ended up complementing each other.