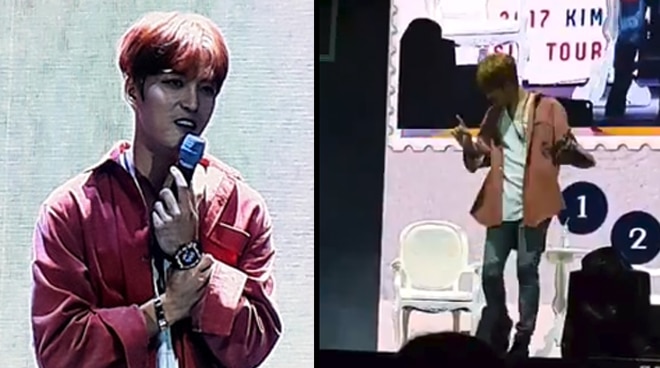 The former TVXQ member did not disappoint his Filipino fans as he showed off his moves while dancing to some of the most popular novelty songs during the Manila leg of his 2017 Asia Fan Meeting at the Araneta Coliseum.

Korean superstar Kim Jae Joon gathered his fans of all ages to his jam-packed show that made him reminisce nostalgic moments of his last visit to the Philippines. As for his young fans, it was a much-awaited two-hour show because they finally saw their idol onstage. And yes, because they are now breathing the same air with their Oppa.

Apart from the fun games and Q and As, Kim Jae Joong also tried out some well-loved Filipino dishes that enabled him to get to know more about our culture. Accompanied by locally brewed beer, the 31-year-old K-Pop star gamely took on the challenge to eat papaitan, kinilaw na isda, chicharong bulaklak, and his now favorite - sisig - of which he cannot believe that its ingredients include a pig's snout, ear, and liver.

Meanwhile, one segment during his fan meeting, in particular, had the entire Big Dome #shookt in amazement: when he started showing off his moves while grooving to OPM novelty hits such as "Spaghetti Song," "Pamela One," "Whoops Kiri," and "Ocho Ocho." Watch Kim Jae-Joong dance his way into your hearts in the videos below:

Before he staged a mini-concert for his fans, he promised them of his imminent return, saying, "I'm definitely looking forward to coming back as soon possible."