Ellen DeGeneres asks K-pop group BTS: ‘Have you all ever dated one of your ARMYs?’ 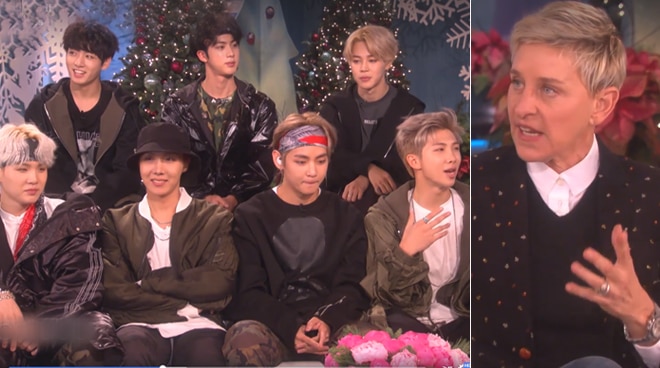 The long wait is over for ARMYs (BTS fans) who have been anxiously anticipating worldwide K-Pop phenomenon BTS make their highly-anticipated appearance on the Ellen show.

While it took a few fans by surprise when they heard straight from Rap Monster that he learned to speak English from the hit TV show Friends, one particular question had everyone screaming and squealing at the top of their lungs. Host Ellen DeGeneres asked the boys if they had ever dated some of their fans before.

But even before the rest of the members got to answer the question, Kim Tae-Hyung or commonly known by his stage name V, was quick to shrug off the discussion from further escalation, saying "no" with conviction. Watch the video below:

BTS also taped episodes for U.S. talk shows The Late, Late Show and Jimmy Kimmel before their performance at the American Music Awards.