EXCLUSIVE: Bailey May to be launched in PH as global pop group Now United member

Bailey recounted how and when he found out that Simon Fuller chose him to be part of the group. 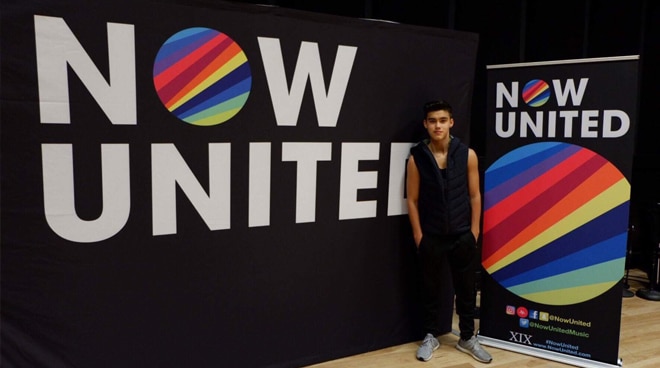 Teen Kapamilya star Bailey May is set to put the country in the international spotlight soon after being selected as the official Philippine representative in the 14-member global pop group Now United.

Created and headed by American Idol founder Simon Fuller, the song and dance group is set to take on projects soon as it’s launched next year.

In an exclusive Skype interview with Bailey (who is still in the US) on Thursday, he revealed that he found out about the good news in August.

“We did a performance for Simon Fuller and he told us to gather around and he said that he’s going to announce the official members of the Now United,” he started.

Bailey admitted that he was really nervous during that moment.

“My heart was racing, I was so nervous. I thought my life could change in a matter of minutes and then he said my name and then, like a burst of happiness rushed through my body. Ever since then it’s been on my mind,” he shared.

Even if he’s now undergoing more trainings in Los Angeles as a member of the group, the “Gusto Kita” singer remains in a state of disbelief that he’s now representing his home country in a global platform or that he’s now an international singer.

“It hasn’t really sunk in yet to be honest. I’m still wrapping my head around it. But it’s been a dream come true,” he said.

According to Now United’s Project Manager Yonta Taiwo, they’ve chosen Bailey to be part of the group because of his well-rounded personality even prior to joining their bootcamp.

“When we came across Bailey, he really stood out. He has everything that you can ever dream of from a star performer,” she said, “He’s got this amazing kind heart, beautiful looks and he’s very charismatic. On top of that he can sing, he can dance, he’s a really cool guy. And beyond that, he’s from the Philippines, so he’s a perfect ambassador for the Philippines.”

Yonta added that the fact that Bailey also speaks Tagalog also contributed to his “global presence.”

What’s going to happen to Bailey and the rest of the members after they’ve announced the official Now United roster?

“We’re currently in the process of choosing because there are lots of offers coming from different promoters throughout Asia and internationally. There are also different brands and different corporations. So we’re just assessing where the best place is to be launch pad for Now United,” she said.

Yonta reiterates the fact that Bailey’s huge fan base in the Philippines is a real consideration for their team.

“Obviously with Bailey and his lots of fans it would make a lot of sense if we come to the Philippines and to launch there. But we’re just assessing at the moment, but we’re definitely coming to the Philippines,” she ended.