The Ikaw Lang ang Iibigin actor does not want to take any credit for influencing his co-star to get into sports. 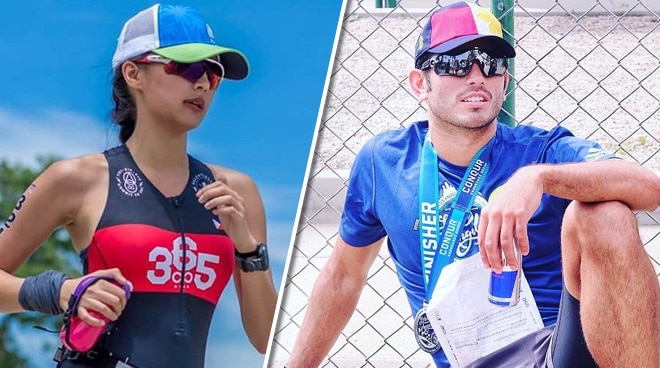 Ever since his first triathlon two years ago, Gerald Anderson said he didn’t realize he would become so in love with the sport.

“I did one triathlon before Ikaw Lang ang Iibigin and then it was sobrang hirap (laughs) so hindi ko na naulit. But yung feeling nung tumawid ako ng finish line sobrang sarap, grabe yung fulfillment and I just remembered it as something I wanted to share with people kasi sobrang sarap ng feeling. Wala pa yung show. I had no idea I was going to do a show sa ganung sport.

Gerald admitted that it was his Nathaniel co-stars and fellow celebrity athletes Isabelle Daza and Ivan Carapiet, who first encouraged him to get into the sport.

“I was doing Nathaniel and parang na-bo-bore ako, gusto ko may gawing iba sa buhay and I did a triathlon just out of curiousity. Ganun naman nagsisimula yun eh. Now ang dami na. I do one every weekend. Kapag meron sumasali agad ako kahit medyo busy sa taping. From basketball to triathlon it was easy. I don’t know. Maganda kasi siguro kaya I fell in love with it kasi china-challenge yung sarili ko. May opponents ka naman sa triathlon but it’s really up to you eh. It’s you versus you talaga,” he revealed.

“It was the show. Nakakahawa talaga siya us doing a show and siguro yung me and Jake we were getting into it talaga training so parang nahawa na rin and now she does races also. I think nakakadaya yung itsura niya, yung built niya but she’s really athletic. Mahilig naman siya sa sports. Even kami ni Jake (Cuenca) we don’t really train together kasi siyempre iba din yung schedules namin so the only time I get to train is pag walang taping so hindi kami magkasama sa training,” he said.

If he were to give tips for aspiring triathletes, Gerald shared mental training is just as important as the physical training.

“Mindset is to really train for it and really just try to enjoy the process. Ako mas na-e-enjoy ko yung training more than the race itself eh. Kasi the training is part of my lifestyle na. It’s the process and the training that I like more. Siguro just enjoy and commit. Mag-commit ka kasi it takes a lot of your time. It really built my mental strength, my being committed to something kasi it takes  lot of your time, and you have sacrifices like going out with your friends, ganun.

“If you’re really serious about the sport and you want to do good, even though kahit weekend warrior lang ako, nakaka-addict siya. So it really helped me build my mental strength and committed me to something so mas natulungan yung career ko because yung acting ko I was more committed to it kasi nahawa din ako kung anong binibigay ko dito sa sport,” he explained.

Gerald also said that having the right gear is also crucial for triathlon training.

“You have to be comfortable kasi isipin mo sa triathlon you’re coming off a swim and then you’re biking and then right after you have to run. So kailangan dun sa run  yun yung pinakamahirap sa tatlo kasi pagod na pagod ka na pagdating sa run eh. And you still have to run fast so you have to be very comfortable.

The Kapamilya actor said he is lucky to not have suffered any major injuries and is still looking forward to two more races before the year ends.

“This year wala ako vacation. Dapat sasama ako sa Barcelona in two weeks for a show lang but no vacation this year. Sana sa December let’s see. This Sunday may laban kami sa duathlon which is run bike run. And then sa November 5 kami for the last triathlon of the year. Masaya siya (laughs),” he remarked.