EXCLUSIVE: Enzo Pineda considers himself lucky to be paired with Jessy Mendiola in his first movie 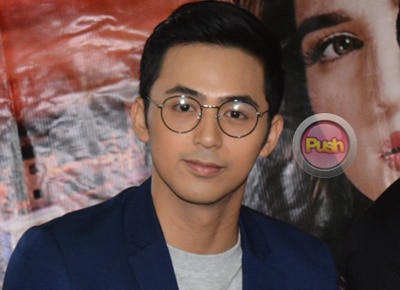 After transferring networks last year, Enzo Pineda said he has received a warm welcome as a new Kapamilya. "It feels great and exciting. Of course coming from another network is also a risk and I’m just really thankful na nabibigyan ako ng mga opportunities to prove myself as an actor. I’m new eh so I don’t expect much but at the same time all the opportunities that are given to me I do my best and I guess it’s paying off. I’m just really thankful na gusto nila yung performance ko. Of course it’s exciting kasi bago. At the same time nakakakaba kasi everything is new to me so kailangan ko mag-adjust as soon as possible. I’m just really thankful na yung mga actors and our director masaya at madali katrabaho,” he shared.

In his first Star Cinema project Extra Service, Enzo played a mute character which was a different kind of challenge. "Character ko dito si Larry, nagtratrabaho ako for Miss Carmi Martin, tita ko siya. Okay yung role ko kasi pipi ako dito. So wala akong mine-memorize (laughs). Ako yung tagabigay ng mga mission ng mga girls. At dahil diyan, na-in love ako kay G (played by Jessy Mendiola). Of course I was excited kasi this is my first movie as a Kapamilya. This is actually my first project also in ABS-CBN. So this movie is very memorable for me. At the same time I also don’t do so much comedy pero I’m just really happy nagustuhan nila direk yung performance ko and sana magustuhan din ng audience. It’s a fun role. I don’t usually get roles like this. Yung role ko kasi dito is a mute pero for me as an actor, the more challenging the role, the better the role is kasi mas tumatatak siya,” he explained.

The 26-year-old actor (who is also currently seen in the Primetime Bida series Til I Met You) also considers himself very lucky to be partnered onscreen with one of the sexiest actresses in showbiz. "Of course Jessy Mendiola is Jessy. Ang daming nagiging crush yan and being paired up with her, knowing that she’s also a very good actress, very professional, is an honor kasi bago lang ako dito sa network tapos I’m being paired with Jessy. Of course it’s very humbling na binigyan ako ng opportunity na ganito.  Si Jessy is quiet and sweet. Unang scene actually namin minamasahe na ako ni Jessy so for me it was awkward (laughs). Pero si Jessy was very professional na nag-usap kami before the scene, we got to know each other for a bit para at least pagdating sa eksena wala ng ilangan. So madali siya katrabaho. Throughout the movie wala akong naging problem working with her. She’s always ready and she’s always willing to give sa co-actor niya,” he said.

The Extra Service actor said he eventually got over the awkwardness of doing scenes with his leading lady. "Well like in any other movie, habang tumatagal you get to know your co-actors so nawawala yung awkwardness and paganda ng paganda yung eksena. And direk Chris (Martinez) kasi ang sabi sa amin, ‘When you go to the set just be happy. Don’t worry about yung mga drama ng ka-eksena niyo. You don’t need that here. Pagdating dito just have fun and be open. Be yourself.” And his advice worked for us,” he recalled.