Have Gretchen Ho and Robi Domingo called it quits? 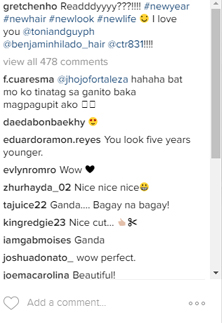 The Umagang Kay Ganda host recently showed off her shorter ‘do on Instagram.

According to her followers, her "fierce" look made her look like a certain K-Pop star and even an anime character.

Some even lauded her for being "gwapo" and for looking like her boyfriend Robi Domingo.

However, there were those followers who asked Gretchen if the new hairstyle, along with the hashtag "#NewLife" has something to do with her relationship with Robi.

Some even went as far as asking whether or not she and the Pinoy Big Brother host have parted ways.

Robi and Gretchen have yet to comment on the issue.