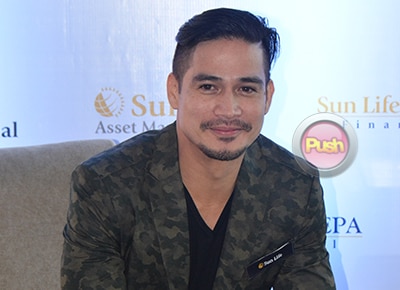 As part of the newest food and travel show on Lifestyle TV, Piolo Pascual admitted it was a different experience for him to go around Osaka, Japan as a foodie. "The whole experience was really interesting. It was the first time for me to host a travel show and I learned so many things about Japan that I didn’t know about before.

“Here you have to be more spontaneous and you have to be experimental in terms of taste buds because sometimes you’re not prepared on what you’re going to eat and dapat gutom ka palagi (laughs). But I enjoyed it because I kind of felt more comfortable knowing that I didn’t have to follow any script. I was just enjoying my trip and seeing these places. I guess for every guy that’s a bucket list to do something like this,” he shared.

The Kapamilya heartthrob said he personally requested for his good friend Lui Villaruz to be his co-host on The Crawl. "I asked for him. He loves food. He loves to travel. We have the same interests at saka mas madaldal siya sa akin so ‘pag gusto ko tumahimik he can talk (laughs). We love to discover food and places. He made it so much easier because he’s so spontaneous and relaxed. He’s always bubbly,” he admitted.

While abroad, Piolo revealed he also had the added challenge while taping the show. "I was sick the whole time we were shooting for some reason. Nagkatrangkaso ako. So medyo masakit yung katawan ko galing ako sa medyo malamig na lugar On the day of our flight I thought I was going to be hospitalized pero you know everything was planned out already so wala eh, you just can’t cancel something like this. I just loaded up on meds. It’s the first time that I worked for five days that I was sick. But it was well worth the experience because that’s when I realized puwede pala natin gawin if we really want to do it. This is all something new to me so that’s where I drew my energy from. And having Lui with me he made it so much easier because pag napaagod na ako nandun siya sinasalo niya ako and it was more relaxed in a way because we’re really good friends. So most of the time we were chatting and just eating away. But even when I got back I was still sick,” he added.

In The Crawl, Piolo said his fans will see a different side of him. "I think it’s more casual in a sense that we were just chatting the whole time and as much as we had an outline as to what the show was going to look like, it was more spontaneous in a sense that we were just enjoying. Siguro yun ang maganda dun, it’s not scripted so what people will see is us enjoying, walking around, trying different food and chatting with people. And for me my favorite cuisine is Japanese ever since I was a kid,” he shared.

Watch Piolo Pascual’s gastronomical trip in Osaka in The Crawl on Lifestyle TV, Saturday at 9:30 pm on SKYCable channel 52.