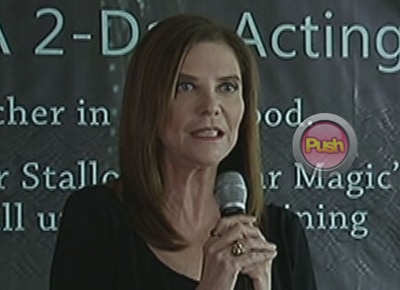 In Ginger Conejero’s report on TV Patrol, Kapamilya stars expressed their delight in having had the opportunity to be mentored by renowned acting coach Ivanna Chubbuck.

In Halle Berry’s acceptance speech during the 2002 Academy Awards for her role in Monster’s Ball, she expressed her appreciation for Ivanna, “I want to thank Ivanna Chubbuck, I could have never figured out who the heck this lady was without you. I love you. Thank you. Thank you so much for being my mentor.”

Charlize Theron also expressed her appreciation towards Ivanna in an interview. The Hollywood actress said, “Ivanna taught me to take my emotion and to take everything that has happened in my life to make me and effective actor.”

Last weekend, the founder of the known Chubbuck technique which is studied by actors around the world came back to the Philippines for a two-day masterclass acting workshop where some of Star Magic’s talents participated in. This was made possible through her previous student, director Rahyan Carlos, who was also behind her visit in 2014.

It was such a dream come true for Kapamilya actors who were able to participate in Ivanna’s mentoring. According to Jake Cuenca, “it’s an opportunity to share the stage from her and getting instructions from her. That’s one of a kind, even Halle Berry has to pay for that stuff. Jared Leto had to pay for that stuff.”

Paulo Avelino also shared, “I’ve always had this urge to learn and just to try out new things and you know, I guess in our craft, or in this type of art, you never stop learning.”  While Jayson Gainza couldn’t contain his excitement, “Oh my God, I can’t describe it anymore. It was so very, ang hirap kasi. May technique si Miss Ivana na hindi porket umiiyak ka, magaling ka na umarte. Kailangan yung objective mo sa isang scene.

Besides the acting technique, the message Ivanna left made an impact. She said, “It’s those people that make it. I’ve been doing this for 35 years and I’ve never seen some of them that their need was fame and fortune ever make it. So I can say 100% it’s not the exemption that makes the rule. Just like, everybody who has made it, even if it’s for a short term has wanted to do it for the right reasons.”

The technique that Ivanna shared can also be utilized in real life. “Just the way of thinking that taking pain and trauma and insecurities and instead of self-destructing and be defeated by it, to actually use it as fuel to overcome and win with it is a great way to lead life.”

Ivanna Chubbuck is also the author of Los Angeles Times bestseller The Power of the Actor.